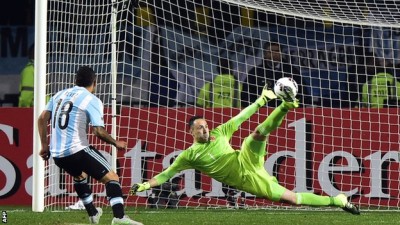 Argentina progressed to the semi-finals of 2015 Copa America, after Lionel Messi and co. prevailed 5-4 on penalties against Colombia, following a 0-0 scoreline after full-time. Argentina thoroughly deserved to go through, as Colombia put up an insipid display on all fronts.

Argentina inflicted an onslaught of chances on the Colombian defense for the entire ninety minutes, with David Ospina (who was later declared the Man of the Match) keeping the Radamel Falcao-led side in the game. Argentina and Sergio Aguero were denied a strong call for a penalty, and the Manchester City forward received a yellow card for dissent instead. Soon after, David Ospina pulled off a miraculous double save to keep the scoreboard at 0-0. Ospina saved a close range shot from Aguero with his legs and quickly parried away Messi’s header on the rebound. The Arsenal keeper, whose position seems under threat from the imminent arrival of Petr Cech, went on to make more such saves and was the only redeeming grace in an otherwise underwhelming Colombian side.

In spite of dominating most phases of play, Argentina failed to break the deadlock and the match progressed to the penalty shootout. James Rodriguez, Radamel Falcao and Juan Cuadrado scored the first three penalties for Colombia, as did Lionel Messi, Ezequiel Garay and Ever Banega.

Luis Muriel skied his spot kick, which allowed Ezequiel Lavezzi to score. Edwin Cardona scored for Colombia and Lucas Biglia missed Argentina’s final kick among the designated five penalties, to keep the tension running in both squads. Juan Zuniga and Jeison Murrilo scuffed their penalties, on either side of Marcos Rojo’s failed attempt, before Carlos Tevez scored the winner and sent Argentina through to the semis.

Argentina will face the winners of the final quarter-final between Brazil and Paraguay.