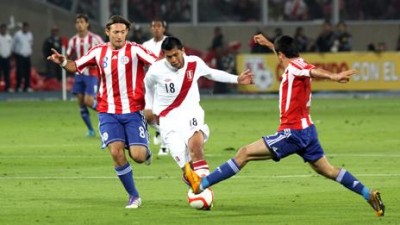 Losing Copa America semi-finalists Peru and Paraguay will come face to face at Estadio Municipal de Concepcion in the ‘Third Place Playoffs’ on Friday, 3rd July, 2015. While Peru pushed Chile to the edge, eventually losing 2-1 to the hosts, Paraguay succumbed to a 6-1 defeat in the hands of Argentina, having conceded four goals in the second half.

Ramon Diaz will be without attackers Roque de Santa Cruz and Derlis Gonzalez. Both players started against Argentina but had to be substituted in the first half, the former due to a hamstring injury and the latter after an awkward fall. Nelson Haedo Valdez and Bruno Valdez are doubtful as well with thigh injuries and will face late fitness tests. Nestor Ortigoza is expected to return to the La Albirroja first team after the defensive midfielder missed the team’s quarter-final and semi-final ties.

Peru have a relatively clean bill of health, but will be without Carlos Zambrano who saw a red card against Chile. Christian Ramos is likely to replace him. The rest of the starting eleven is expected to resemble the one that started against Chile.

Peru have been one of the revelations of the tournament. They fell only to their second defeat against Chile, having lost the tournament opener against Brazil. The Los Incas have played some smart football throughout the competition, on the back of a solid defensive unit and getting goals at crucial junctures. Considering Paraguay’s injury concerns, Peru will start the game as favourites.

Paraguay were the second lowest ranked CONBEMOL nation at the beginning of the competition. Yet, Ramon Diaz has been able to stitch through an impressive cup run, relying on his attackers who scored every time they looked down and out.

“Paraguay are always dangerous, regardless of their thrashing. It’s going to be complicated game no matter the absences.”
– Ricardo Gareca, Peru manager.

“We know that Peru have shown that they are in the process of growing and I’m sure both teams are going to give their best to finish in third place.”
– Ramon Diaz, Paraguay manager.

According to Head-2-Head statistics, Paraguay have won 46% while Peru ave won only 30% of the encounters between these two sides. However, based on current form, Peru should comfortably win by a 3-1 scoreline.