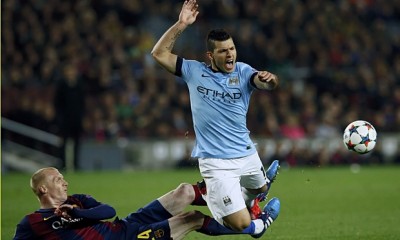 The Financial Fair Play restrictions which were imposed upon Manchester City and Paris Saint-Germain last season, have been lifted, the UEFA announced today. The club financial control body of the governing body of football in Europe reached an unanimous decision regarding the transfer spendings and squad restrictions of nine clubs, which had come under the scanner due to excessive spending.

The Premier League runners-up along with Paris-Saint Germain and seven other European clubs had been found in breach of the Financial Fair Play rules and received sanctions, back in May of last year. Manchester City were restricted to a transfer spending of £49m in the previous season. Manuel Pellegrini’s side were also ordered to play in the 2014/15 UEFA Champions League with only 21 players in their squad, as opposed to the 25 players usually allowed. Both these sanctions have been lifted, as Manchester City met with the financial targets set by UEFA for the club to achieve in one year.

Should the Sheikh Mansour owned club continue to meet targets agreed upon with the UEFA until 2016, they should face no problems whatsoever. During the time of sanctions last year, Manchester City were also fined £16.3m per year for three years, but only had to pay the fine for the first year.

The lifting of the transfer limit is a definite boost in the arm of Manchester City, who are looking to rebuild their squad as they once again prepare to challenge Chelsea for the Premier League title. The likes of Paul Pogba and Raheem Sterling have been identified as major summer transfer targets and UEFA’s announcement pushes City on the right track.