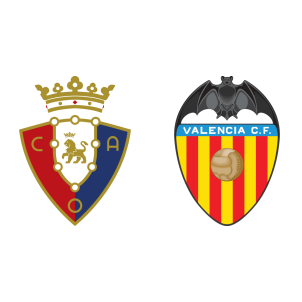 Osasuna vs Valencia – Valencia travel to El Sadar to face Osasuna in a La Liga clash which could have a profound effect on the relegation line-up of the Spanish top division.

Valencia are seventeenth in league standings with twelve points while Osasuna are twentieth with seven points. Osasuna have lost all of their last six league matches and have won only once this season. Valencia, on the other hand, have lost three and drawn three of their previous six La Liga fixtures.

Valencia’s last outing before the winter break ended in a 3-2 loss to Real Sociedad while Osasuna were comprehensively beaten 2-0 by Deportivo La Coruna.

Valencia will be without the injured Ezequiel Garay, the suspended Joao Cancelo and Aymen Abdennour who is on international duty.

According to Osasuna vs Valencia H2H Stats, the last five league meetings between these two clubs have resulted in four wins for Valencia and one draw.

In fact, Osasuna have not won any of their previous eight matches against Valencia in all competitions. Osasuna have failed to score in 5 of their last 6 La Liga matches, but Valencia have conceded a minimum of two goals in their last three away matches in the league.

At home, in their previous four games, Osasuna have scored only once and conceded nine goals and will be the underdogs tomorrow. A 2-1 win for Valencia is the most probable result of this match.