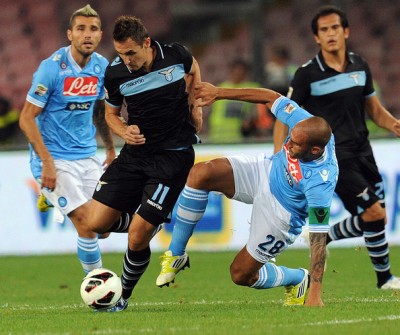 Napoli welcome Lazio on the final matchday of the season, in what promises to be a thrilling encounter between the two Serie A clubs. Lazio are on 66 points while Napoli have accumulated 63 points after 37 matches each. Both sides have been embroiled in a battle for the third and final UEFA Champions League spot for most parts of the season. Lazio eventually secured themselves a third-place finish, although by a narrow margin. Even a win tomorrow cannot get Napoli into the UEFA Champions League qualifiers as Lazio boasts of a much superior goal difference.

Michu, Juan Zuniga and Jonathan de Guzman are sidelined through injuries and will play no part whatsoever for the hosts. Kalidou Kolibaly is available and will replace the suspended Miguel Britos. For Lazio, Stefano Pioli will miss the services of Honorato Ederson, Lucas Bigila and Stefan Radu.

Rafael Benitez has the luxury to choose his strongest possible XI. Napoli are expected to field Mariano Andujar, Christian Maggio, Raul Albiol, Kalidou Kolibaly, Faouzi Ghoulam as the back five. Gokhan Inler and David Lopez will feature as the holding midfielders in a 4-2-3-1 formation. Gonzalo Higuain will lead the line with Jose Callejon, Lorenzo Insigne and Marek Hamsik supporting him in creating and scoring chances.

Lazio do not have a set formation and often oscillate between a 4-3-3 and a 4-2-3-1. Dusan Basta, Stefan de Vrij, Santiago Gentiletti and Edson Braafheid will form the defense with Federico Marchetti in goal. While Marco Parolo, Danilo Cataldi and Senad Lulic line up in midfield, Antonio Candreva, Felipe Anderson and Filip Djordjevic will be tasked with scoring goals.

There is not much to separate the two teams, with both sides dropping points at crucial junctures of the season and producing occasional flashes of brilliance. Lazio are on the verge of qualifying for the UEFA Champions League after a period of few years and Napoli seems to be heading into another tumultuous summer with their manager Rafael Benitez (who has been strongly linked to the vacant post at Real Madrid) set to leave the club at the end of the season.

Both sides are coming into this match on the back of a loss. Napoli need a positive result as anything but a win could see Fiorentina (who have a winnable fixture against Chievo) pip them to the fourth spot. The odds favour a Napoli win at 2.1, a draw at 3.5 and a Lazio win at 3.5. Napoli will win this 2-1.