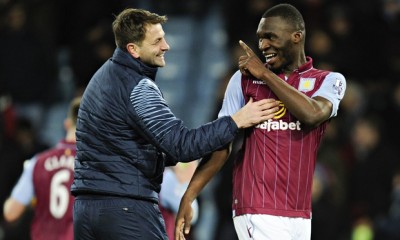 The FA Cup final against Arsenal on Saturday could be Christian Benteke’s last game in Aston Villa colours as Liverpool look to prepare a bid for the Belgian forward in the coming weeks.

Liverpool’s goalscoring problems have been well documented this season, with Daniel Sturridge, Rickie Lambert, Mario Balotelli and Fabio Borini scoring only eight times in the league this season. Christian Benteke, on the contrary, has been a revelation ever since he joined Villa Park in 2012/13 season. Benteke exploded onto the scene with 23 goals in all competitions in his debut season. He had a relatively meagre return by his standards following a series of injuries in 2013/14 but still reached a double figure in the Premier League. This season he has scored 15 goals in 32 appearances, but 12 of those came in Villa’s last 12 games. The 24-year-old, who is also Belgium’s first choice centre forward, has been reinvigorated under Tim Sherwood and it has shown on pitch through the upsurge in his and Aston Villa’s form.

Villa boss Sherwood has acknowledged that he would be helpless if a club decides to meet Benteke’s clause but insisted on keeping him at Villa Park otherwise.

“We’re building up to a European Championship, which is a huge stage for Christian, and a tournament where you feel that Belgium will be one of the favourites to win it. By playing for Aston Villa it hasn’t hindered him being the first choice for Belgium up to now.

If he were to stay here and score at the ratio that he has since I took over, and ends up with 20 or 30 goals next season and then has a good Euros, he is probably playing for Real Madrid. Christian could go to the best club in the world if he scores 30 goals next season. He could be that good.”

Christian Benteke has a £32.5m release clause in his contract, which was inserted when he penned a new deal at the Villa Park after his successful first season on the English shores. Benteke have repeatedly attracted the attention of top clubs, with the likes of Chelsea and Manchester United linked to him at some point or the other. This summer, Liverpool are serious contenders to bring Benteke to Merseyside as Brendan Rodgers plans to re-build his side from a scratch after Steven Gerrard’s departure. With the possible sale of Raheem Sterling looming in near future and with the owners determined to offer Rodgers with all means available to get Liverpool back into UEFA Champions League, money should not be a problem for the Kops. Liverpool have a young, talented core in the likes of Emre Can, Philippe Coutinho, Adam Lallana, Jordan Henderson, Alberto Moreno but have repeatedly struggled due to the lack of a centre forward with a regular return of goals.

Benteke’s performance in the FA Cup final could further raise his stock and Liverpool will do well to get a proven goalscorer among their ranks.