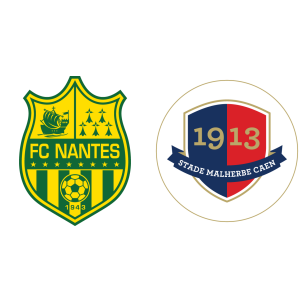 Nantes vs Caen – Nantes hosts Caen at the La Beaujoire on 18th January, Wednesday in a mid-table Ligue 1 fixture which could decide the fate of the relegation-threatened clubs.

Nantes are fourteenth in league standings with twenty two points while Caen are fifteenth in Ligue 1 with twenty one points. Nantes have won their last three matches on the trot, picking up nine points in a recent upsurge of form after a disastrous first half of the season.

Caen have won only two of their last six matches but have also managed to draw a couple more games in this period, bettering their chances of surviving relegation and remaining in France’s top division for another year.

Remy Riou and Kolbeinn Sigthorsson are sidelined through injuries for Nantes while Mouhamadou Dabo and Jeff Louis miss out for Caen due to injuries. The visitors will also be without Syam Ben Yussef who is on international duty.

“Caen are a tough team. It is a team with a dynamics really very interesting. Defensively and offensively, they work well. And against Lyon, they also made a great game. There are three points at stake. For me, tests are on a daily basis. The matches are the result of the work of the week. There are three points in play for two teams that have the same goal. It’s important to win to increase our ranking comfort.”

According to Nantes vs Caen H2H Stats, the last five matches between these two clubs have resulted in three wins for Caen and two wins for Nantes. As Caen have lost 8 of their last 9 away matches in the Ligue 1, Nantes are likely to win 1-0 tonight.