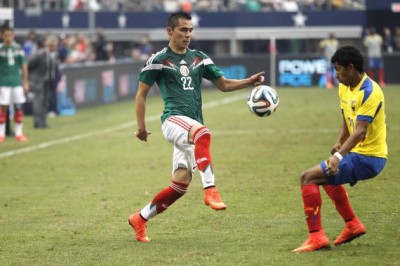 Mexico will take on Ecuador in their final Group A game this Friday as Miguel Herrera’s team look to seal qualification to the knock-out stages. Ecuador have already been knocked out of the tournament after consecutive losses against Chile and Bolivia. With Chile and Bolivia both on 4 points and playing each other later in the day, a Mexico win could give rise to interesting permutation-combinations considering direct advancement to the next round. The match will be played at Estadio El Teniente, Rancagua.

Mexico will be without skipper Rafael Marquez, who is in the danger of being ruled out of the competition due to a thigh injury. Juan Carlos Valenzuela replaced Marquez at centre half against Chile and is expected to start this match as well.

Juan Carlos Medina was excellent in the 3-3 draw against Chile and might be included in the starting line-up once again, although Javier Aquino or Luis Montes could play a far more attacking role, if handed a start.

Ecuador have some classic counter-attacking experts in their squad but the absence of Antonio Valencia reflects heavily on the side, which has looked far from convincing.

Mexico have a realistic chance of qualifying to the knock-outs, in spite of the fact that they drew both their matches. Their performance against Chile, in spite of the impressive work-rate from all quarters, only showed glimpses of the talent the country possesses. Herrera will look to set up Mexico with their usual free-flowing style, which promises of a high-intensity encounter.

Ecuador have not won a Copa America game since their 4-0 win against Venezuela in 2001. It is far from likely that Ecuador will buck the trend against Mexico. While Ecuador’s attacking players have failed to threaten on a consistent basis, their defenders boast of the worst record in this year’s Copa America, already conceding five times in two matches. The lack of cohesion and struggles during transition of play from defense to attack has left Ecuador wanting in all departments.

Mexico has the ability, based on previous encounters, to see off Ecuador, a scoreline of 2-1 being the most probable.