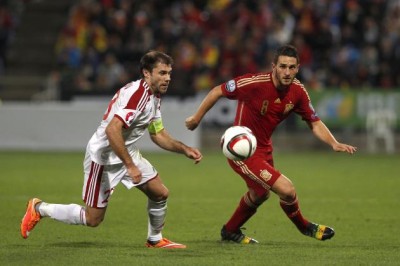 Belarus will host Spain in a Group C fixture of the qualifying competition for the UEFA Euro 2016. Spain are on 12 points, three points off Slovakia who are the leaders in Group C while Belarus sit in the 4th position with just 4 points. It will be Vicente del Bosque’s 100th game in charge of the La Roja.

Diego Costa (Chelsea) is unavailable, so del Bosque will start either among Alvaro Morata or Paco Alcacer. Spain have a relatively healthy squad otherwise.

Belarus will be without the serivces of Mikhail Gordeychuk, Sergei Balanovich and Dmitri Verkhovtsov, all of whom withdrew from the squad ahead of the Russia game.

Belarus have never qualified for a major international tournament till date and their fortunes look unlikely to change after a poor start to the first half of the qualifying campaign.

Spain have won two Euros in 2008 and 2012 and the 2010 FIFA World Cup under the guidance of Vicente de Bosque, but have lost four out of nine games since the last World Cup in Brazil. The reigning Euro champions are in a dire need of re-inventing their style of play and it remains to be seen whether del Bosque is the right man to take Spain forward.

Belarus will cause an upset if any result other than a win for Spain comes from this particular fixture. Spain should comfortably see of Belarus by a 3-0 margin.