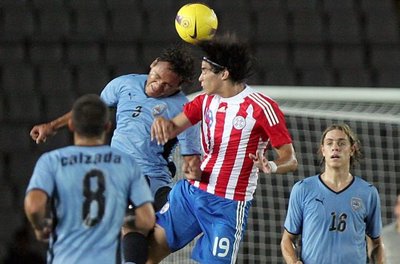 Uruguay will face Paraguay in their final Group B game at Estadio La Portada, La Serena in what is a must-win encounter for the defending champions. Uruguay defeated Jamaica by a solitary goal, but lost to Argentina, courtesy Sergio Aguero’s winner in their second match and sit on the third place with just three points. Paraguay, on the contrary, need just one point to secure qualification to the knock-out stages, after their surprise draw against Argentina and win against Jamaica. A repeat of the final of the 43rd Copa America, this fixture between La Celeste and La Albirojja might prove to be an even more thrilling affair.

Uruguay will be without captain Diego Godin after the centre back picked up a yellow against Argentina and will serve his one-match suspension against Paraguay. Oscar Tabarez is likely to make widespread changes to his team. Sebastian Coates (Liverpool), Carlos Sanchez (River Plate) and Abel Hernandez (Hull City) are expected to start in place of Godin, Nicolas Lodeiro and Cristian Rodriguez. Diego Rolan is also in the danger of losing his place after lack of goals troubled the youngster in the first couple of matches.

Paraguay have all their players available. Roque Santa Cruz is the first choice to lead the line, which will put Nelson Valdez on substitute’s bench, in spite of his goal against Argentina.

“They (Paraguay) are a strong rival and we expect a difficult game. But we need to go out to win because it’s the only chance we have left.”

“We know Uruguay have quality players and we respect them. But we also have a good team and we are confident. It (Godin’s suspension) will affect Uruguay a lot. Not just because Godin is a great player but because he is the captain.”

Contributor’s Pick Uruguay have won 50% of its encounters against Paraguay till date, according to Head-2-Head statistics. However, current form provides Paraguay with a real chance of securing a draw and progressing to the next round. The odds favour a Uruguay win at 2.3, a draw at 3.1 and a Paraguay win at 3.75. Going with the trend of upsets in this year’s Copa America, a 1-1 draw is the most likely result.