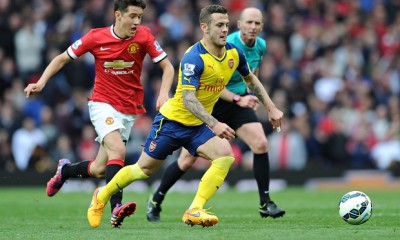 Manchester United played out a 1-1 draw against Arsenal at Old Trafford on Sunday, and handed the Gunners an advantage in the battle for the third position in Premier League standings and direct qualification to next season’s UEFA Champions League.

Louis van Gaal set up his side in an adaptation of 4-5-1 with Daley Blind in the holding midfield. Marouanne Fellaini and Ander Herrera completed the midfield trio, while Ashley Young and Juan Mata were tasked with providing the width. Radamel Falcao started instead of Robin van Persie. Chris Smalling, the centre half took the captain’s arm-band in Rooney’s absence.

For the Gunners, Santi Cazorla and Francis Coquelin started in deep midfield, with Aaron Ramsey, Mesut Ozil and Alexis Sanchez in the attacking band. Olivier Giroud retained his place as the targetman. Per Mertesacker and Laurient Koscielny were the centre-back pairing.

Manchester United dominated the first half, as Arsenal failed to register a single shot in the entire period of 45 minutes. Santi Cazorla was particularly wasteful in possession and Coquelin was repeatedly outnumbered against the onslaught of Fellaini and Ander Herrera. While Fellaini ensured physical dominance in the middle of the park, Herrera found pockets of space to operate. As has been the case in quite a few occasions this season, the goal came through the brilliance of Ashley Young. Young made a superb run with the ball and managed to pick out Herrera on the edge of the box, who volleyed it past David Ospina. United threatened a few more times in the half, but nothing conclusive came of those attacking moves.

The balance tilted in the favour of the London club once Jack Wilshere was substituted in place of the inefficient Santi Cazorla, as the balance in the midfield was restored. Theo Walcott’s inclusion and Coquelin’s drop to right back enhanced Arsenal’s attacking impetus. United’s chances were further hampered when David de Gea left the field after pulling his hamstring. Victor Valdes took de Gea’s place, but the lack of proper game time was evident as the Spaniard struggled to command his box. He was left wrong-footed when youngster Tyler Blackett turned Walcott’s cross into his own net. The own goal suddenly resulted in a flurry of promising Arsenal chances thereafter. The United defence scrambled to clear in set-pieces, but the game ended in a draw.

It was a result, fair to the performances of both sides.