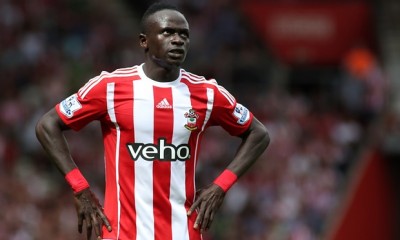 Sadio Mane has emerged as a transfer target for Manchester United after Chelsea hijacked the Pedro deal from the Manchester-based club. The club made a surprise enquiry for the 23 year old Southampton forward in order to strengthen the attacking aspect of their squad.

Manchester United currently have only Wayne Rooney as a world-class striking option. Although Louis van Gaal expressed he isn’t worried about the goal-scoring options he has in the squad, it is unlikely that the Dutch manager will be happy going into the seasonwith the inconsistent Javier Hernandez and inexperienced James Wilson as back-ups to Rooney. Louis van Gaal has occasionally played Adnan Januzaj in the centre forward’s role this year in the pre-season and the Belgian is expected to be a crucial component of the Manchester United squad.

Sadio Mane has an excellent season with the Saints, scoring 10 goals and even the fastest hattrick in the Premier League within 176 seconds. An explosive wide forward, Sadio Mane has the ability to stretch the game on the wings and also boasts of a decent shooting percentage. Mane’s versatility is displayed from the fact that the 23-year-old is equally comfortable through the middle as he is on the wings. With an inherent eye for the goal, Sadio Mane would be a good addition to the Manchester United squad. Sadio Mane has often been criticized for his defensive frailties, but there is not doubt the Senegalese is one of the best dribblers in the Premier League.

The manner in which the club lost out on Pedro, due to disagreements with Barcelona over the structuring of the transfer fee has worried the Manchester United fan-base about Ed Woodward’s ability to close deals, in spite of a transfer window where the Red Devils have completed the signings of Memphis Depay, Morgan Schneiderlin, Bastian Schweinsteiger and Matteo Darmian.

Manchester United are yet to sign a centre-back as well. Although the 2012/13 Premier League champions were linked to Sergio Ramos and Nicolas Otamendi, the club failed to land either player, the former signing a new deal at Real Madrid and the latter choosing to join local rivals Manchester City instead.

With Manchester United also interested in the services of Thomas Mueller, it is unclear at this point of time how Sadio Mane will fit into the squad. However, the Red Devils may get disappointed again with both Bayern Munich and Southampton deeming their players as unsellable.