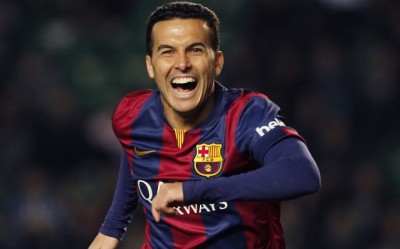 Chelsea have pipped Manchester United to the signing of Pedro, in one of the most surprising transfer moves of the summer. Until yesterday, Manchester United were considered the front-runners for the Spanish international who has increasingly grown frustrated with his lack of playing time at Barcelona.

Pedro’s buy-out clause had been dropped from €150m to €30m, in a show of solidarity from the Barcelona board for the player who had selfless served the club for seven seasons. Chelsea were one of the first clubs to be linked to the forward, but understandably all negotiations were held off until Barcelona’s Presidential elections were completed.

Manchester United emerged as the leading suitors for the services of the 28-year-old with several news outlets across Europe suggesting that the deal would be completed with relative ease before the end of the transfer window. Ed Woodward had flown down to Spain on Monday to meet Barcelona officials as well as the player’s representatives to close the deal. However, both clubs failed to reach an agreement as Manchester United offered only €26m as a guaranteed fee, with another €2m based on performance and appearances made by the player.

There were also reports which indicated towards Louis van Gaal’s reluctance to bring in the player, in light of Manchester United’s supposed interest in Thomas Mueller. Some speculated Manchester United’s plan was to push the transfer forward through the player himself, so that Barcelona is forced to sell an unsettled player before the summer transfer window closes.

However, Chelsea took advantage of Manchester United’s hesitancy and lodged a bid worth €28m, with another €2m as add-ons. According to The Telegraph, Barcelona accepted the bid and the player was contacted during Manchester United’s UEFA Champions League qualifier against Club Brugge. Pedro’s representatives, on attempting to contact Manchester United, were met with silence and the Red Devils refused to increase their bid any further. When offered a similar salary packet by Chelsea as he would have earned at Manchester United, the player consented for the transfer.

Chelsea carried out Pedro’s transfer with exceptional efficiency and swiftly closed the deal with Marina Granovskaia looking over the financial aspect and Jose Mourinho combining with Cesc Fabregas to convince the player to choose the Premier League champions as his future employers. Pedro is expected to undergo a medical on Thursday, following which the Spaniard is expected to pen a five-year contract with Chelsea FC.