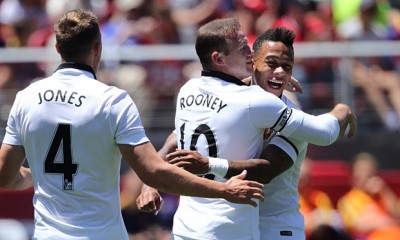 Manchester United pulled off a memorable 3-1 win against Barcelona at San Jose in their penultimate match of the International Champions Cup. Louis van Gaal should be pleased with the performance of the Red Devils, specifically after he mentioned that the team which started against Barcelona will be the likely eleven to take to pitch in the season opener against Tottenham Hotspur on 8th of August.

Wayne Rooney put United in the lead just after eight minutes when he headed in Ashley Young’s corner, which Adriano had failed to clear. Luis Suarez had almost put Barcelona in front, moments prior to that when the Uruguayan’s shot hit the post having beaten David de Gea off a free kick.

The Manchester United goalkeeper, starting for the first time since last season’s Premier League match against Arsenal was in fine form as he made a save off Sergi Roberto, after the Barcelona attacker was played in by Rafinha. Andres Iniesta pulled the strings from the midfield, with Barcelona constantly threatening through Luis Suarez. Manchester United matched Luis Enrique’s side in the tempo and it was a thoroughly enjoyable affair for the sell-out crowd at San Jose.

Memphis Depay showed sparks of brilliance but failed to get on the scoresheet as he fluffed his shot after Wayne Rooney put him through on goal. the youngster needs to work on his consistency and finishing, should he wish to live up to the expectations pinned on him by the United fanbase.

Van Gaal changed his entire side at the 62-minute mark. Marouanne Fellaini got the first look-in, notably benefiting from Bastian Schweinsteiger’s injury. Within moments, Manchester United doubled the lead as Jesse Lingaard scored off a clever ball from Tyler Blackett behind Barcelona’s defensive line.

Rafinha reduced the deficit with a terrific volley from the edge of the box close to the ninety minute mark, but Adnan Januzaj doubled the lead as soon as play restarted, rounding off Marc Batra and slotting past an outstretched Ter Stegen.

Manchester United’s squad is coming together in a nice way, which will be a pleasant happening for Louis van Gaal as the Red Devils mount their challenge for the Premier League title this season, after being on the outskirts for the last couple of seasons. Barcelona missed the creativity of Lionel Messi and Neymar, who are on the post-Copa America break but the defensive lapses will worry Luis Enrique.

Manchester United will face Paris Saint-Germain next as Barcelona will meet Chelsea in the final matches of the International Champions Cup.