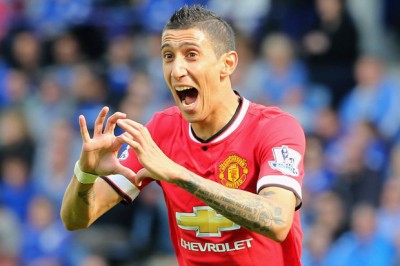 Manchester United has accepted a bid worth €65m(~£45.9M) from Paris Saint-Germain for Angel di Maria, according to French media outlet France Football. The Argentine, who was a British record transfer last summer, has had a troubled season at Manchester United and was linked with a move away from Old Trafford even prior to the end of the last season.

Although Angel di Maria would have preferred a move back to Spain, his high wages and enormous transfer fee chased potential suitors away. Paris Saint-Germain have been interested in the winger’s services for some time now and if France Football is correct, the Parisian club had their opening  bid accepted by the Manchester United board.

Angel di Maria had an excellent start to his Manchester United career, scoring and creating goals at will within the first few weeks of his Premier League debut. However, injuries and subsequent loss of form saw the Argentine winger being relegated to substitute’s bench, with Ashley Young staking claim on Di Maria’s spot in the starting line-up.

There have been widespread rumours suggesting fall-outs between the United boss Louis van Gaal and the player, with most speculations indicating that the former Real Madrid midfielder has failed to understand his role in van Gaal’s tactical setup. With Manchester United already signing Memphis Depay and heavily linked to Barcelona forward Pedro, gametime may further reduce for Angel di Maria at Old Trafford.

The Ligue 1 champions have never shied away from making costly purchases and with the spending limitations lifted, Paris Saint-Germain are looking to add a few world class players who will help them win the coveted UEFA Champions League. PSG have a number of options on the wings, in form of Lucas Moura and Lavezzi, but Angel di Maria could elevate the overall quality of the squad, also providing Laurent Blanc’s team with essential depth in the creative section. A pre-dominantly left-footed player, di Maria’s versatility in midfield makes him suitable for Paris Saint-Germain. The 27-year-old scored 4 goals and registered 10 assists last season.

Manchester United have done some excellent business this season and while a section of the Red Devils fans are surprised with United looking to cut off ties with di Maria, selling the Argentine, albeit at a loss of £15m (Manchester United purchased him for £59.7m in 2014) will help Ed Woodward and co. to recover some of the cash they have out-laid on transfers this summer.