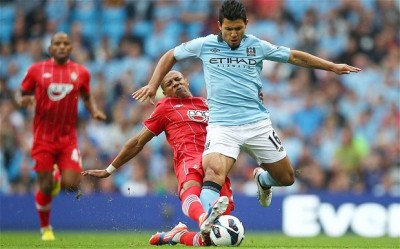 Manchester City will host Southampton at the Etihad on the final day of the 2014/15 English Premier League season as both teams aim to finish the season on a high. While Manchester City has had a tumultuous season under Manuel Pellegrini losing their Premier League title and getting knocked out of cup competitions early in the season, Ronald Koeman’s Southampton have beaten the early season odds and are in with a bid to qualify for Europe next season.

The match is enthralled in a number of sub-plots on both sides. While both Morgan Schneiderlin and Nathaniel Clyne’s futures hang in balance, Yaya Toure might be playing his last match for City tomorrow. Frank Lampard will also play his last Premier League match as he moves to New York City FC, post the completion of this Premier League season. Manchester City are on the second position in the league table with 76 points, while Southampton sit at the seventh place with 60 points.

Samir Nasri is the only injury casualty for the Mancunians. The Saints will be without Jay Rodriguez, Fraser Forster, Morgan Schneiderlin and Emmanuel Mayuka, all of whom are sidelined through injuries. Dusan Tadic, who is rumoured to be match-fit, will definitely be in the matchday squad for the Saints and feature in some form, even if it is in the later stages of the ninety minutes duration.

Manuel Pellegrini might start both Sergio Aguero and Wilfried Bony up front in a 4-4-2 formation with David Silva and James Milner on either flank. Fernandinho and Yaya Toure will be in the midfield with Vincent Kompany and Elaquim Mangala in the central defense. Aleksandar Kolarov and Pablo Zabaleta are the first choice fullbacks in Pellegerini’s side and England’s No. 1 Joe Hart will don the goalkeeping gloves.

Ronal Koeman is likely to start the same team which comprehensively defeated Tim Sherwood’s Aston Villa 6-1 in the previous gameweek. Sadio Mane, Shane Long and James Ward-Prowse will form the second band of attacking threat behind Graziano Pelle. Victor Wanyama and Steven Davies will be tasked with stopping City’s attacking threat in the deep midfield. Nathaniel Clyne, Toby Alderweireld, Jose Fonte and Ryan Bertrand will form the usual backline in Koeman’s preferred 4-2-3-1 while Paulo Gazzaniga is expected to start in the goal, ahead of Kelvin Davis.

Manchester City have won 4 of their last 6 meetings against Southampton. The Citizens also rank among the form clubs in the tournament currently and are favourites in this contest. Manchester City will defeat Southampton, with the final scoreline reading 3-2.