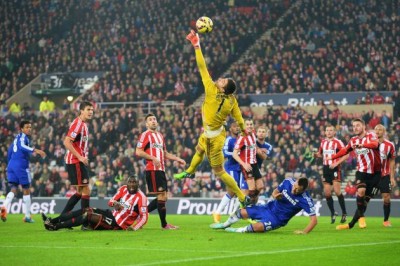 Chelsea will welcome Sunderland on the final day of the 2014/15 Premier League season as the Champions will prepare to lift their 5th Premier League title, when the presentation ceremony gets underway at the end of the match.

Sunderland escaped relegation for the second year running, when they drew against Arsenal in midweek and will look to gain a positive result, especially in light of Chelsea’s loss at West Bromwich Albion this past week.

For Chelsea, Oscar, Ramires and Kurt Zouma are sidelined through injuries. Cesc Fabregas will serve his one-game suspension following the red card he saw in the last game. Eden Hazard will miss the game after a surgery to remove his wisdom teeth. Petr Cech has also been listed as doubtful.

The Black Cats will be without Ricardo Alvarez, Liam Bridcutt, Jordi Gomez, Wes Brown and Costel Pantilimon. Danny Graham will face a late fitness test, but is unlikely to start.

Chelsea will field youngsters Ruben Loftus-Cheek and Andreas Christensen. Diego Costa, Loic Remy, Willian and Juan Cuadrado will be tasked with creating chances and scoring opportunities. John Terry is expected to make his 38th league start of the season, in order to cap off an incredible season and Filipe Luis might feature as well.

Dick Advocaat has his first choice backline in Billy Jones, Sebastian Coates, John O’Shea and Patrick van Aanholt. Vito Mannone is expected to start in goal in Pantilimon’s absence. Steven Fletcher will lead the line, after an excellent showing against Arsenal, with Germain Defoe and Adam Johnson on either side.

Chelsea have already entered the holiday period, but have enough gas in their tank to see off Sunderland with a 2-0 scoreline.