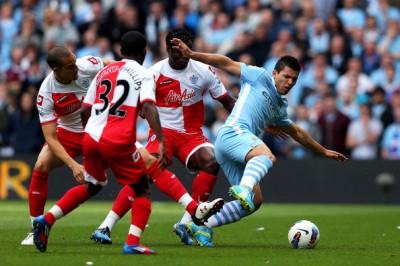 Manchester City face relegation-threatened Queens Park Rangers in the first of the two Super Sunday games of Barclay’s English Premier League. Manchester City, who are in 2nd position on the league table with 70 points have won the last three matches after losing two on the trot. Queens Park Rangers, who haven’t won in the last four games, are likely to go down, except for a miracle.

While Manchester City are battling with Arsenal for the runners-up position in the league, Queens Park Rangers have not won in 20 of their last 22 Premier League matches, a statistical scenario which is unlikely to change after this Sunday.

Steven Jovetic, Yaya Toure and captain Vincent Kompany will be absent through injuries. Jesus Navas is struggling with a hamstring injury and listed as doubtful. Samir Nasri, who barely lasted three minutes against Tottenham Hotspur might not be in the matchday squad as well.

The London side has a number of players missing with Alejandro Faurlin, Eduardo Vargas and Mauro Zarate confirmed absentees due to injury. Nedum Onuha is suspended after he saw a red card at Anfield in Rangers’ last match. While Rio Ferdinand may sit out the game due to his personal tragedy, Steven Caulker and Armand Traore are doubts too. Bobby Zamora could be back in the starting XI though.

Manuel Pellegrini will line up his team in a 4-2-3-1 with Segio Aguero up front, James Milner, Frank Lampard and David Silva in the attacking band and Fernando and Fernandinho in the holding band of midfielders. The back four are likely to remain same in Alexander Kolarov, Elaquim Mangala, Martin Demichelis and Pablo Zabaleta.

Chris Ramsey’s Rangers prefer a 4-4-2 formation. Matthew Philips, Sandro, Joey Barton and Leroy Fer could form the middle bank of four to support Charlie Austin and Bobby Zamora in the attack. Caulker, though a doubt due to a fracture in his hand. might start due to lack of other options.