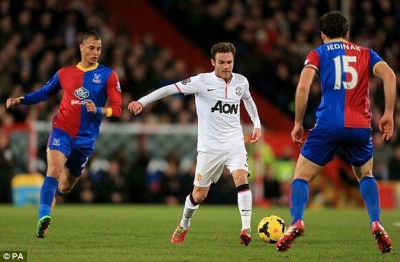 Manchester United sit on the 4th position in the Premier League table with 65 points while Crystal Palace are in 12th position with 42 points.

Jonathan Williams is the only confirmed absentee through injury for Alan Pardew, but Jerome Thomas, Marouane Chamakh and Fraizer Campbell have been listed as doubtful too. Martin Kelly, Mile Jedinak and Glenn Murray were dropped for Palace’s match at Stamford Bridge last week and could return to the starting XI this weekend. Louis van Gaal will be without the services of Marcos Rojo, Luke Shaw, Jonny Evans and Rafael at the back and Michael Carrick in midfield.

Crystal Palace have regularly set up in a 4-3-3 under Pardew. Yannick Bolasie, Glenn Murray and Wilfried Zaha could be the front three while Joe Ledley, James McArthur and Jason Puncheon play in the midfield.

Manchester Untied forwards have really struggled to get going this season. Yet, Robin van Persie could start up front in a 4-1-4-1, with Marouane Fellaini, Wayne Rooney and Ander Herrera in the midfield. Juan Mata is expected to feature and Angel di Maria may get a start. Daley Blind could start at left back in absence of a more conventional option.

Manchester United have dominated possession in their last few matches, a fact correctly pointed out by Louis van Gaal but have failed to convert most of their chances, again an observation from the United boss in the recent pressers. Crystal Palace, meanwhile, have been on a downhill slope ever since their top flight status was confirmed after a good measure of form under Pardew.

Manchester United are favourites to win by a margin of 3-2.