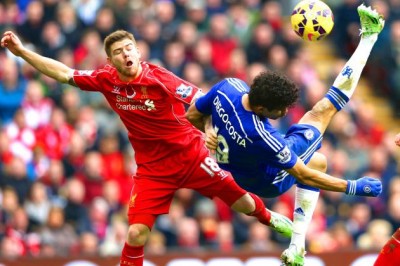 The 2014/15 English Premier League champions Chelsea welcome Liverpool to Stamford Bridge in the final fixture of Sunday, with the Kops still having a chance to make the UEFA Champions League places, should they win their remaining three games. The match is also enthralled in a number of interesting sub-plots as Steven Gerrard and co. will have to offer the Blues a “guard of honour”, the team which was primarily responsible for Liverpool missing out on the title last season.

While Chelsea have accumulated 83 points, Liverpool are in 5th position with 61 points.

Jose Mourinho will have to do without the services of Diego Costa and Oscar, both of whom might miss the rest of the season. Ramires is doubtful as well. For Brendan Rodgers, the absentees through injuries include Daniel Sturridge, Jon Flanagan, Mamadou Sakho and Mario Balotelli.

In Chelsea’s 4-2-3-1, Remy is likely to start up front (after recuperating from his injury) while the likes of Ruben Loftus Cheek, Filipe Luis, Kurt Zouma, Juan Cuadrado may also get a look into the starting XI. Rodgers may set up his side in a 4-3-3 with Raheem Sterling, Adam Lallana and Philippe Coutinho as the front three. Steven Gerrard, Lucas Leiva and Jordan Henderson will form the middle three, tasked with the job of stopping Nemanja Matic and Cesc Fabregas.

Chelsea are worthy champions and they don’t look like giving up their incredible form at Stamford Bridge. The odds favour a Chelsea win by 2.1, a draw by 3.5 and a Liverpool win by 3.8. The Blues might edge Liverpool 2-1.