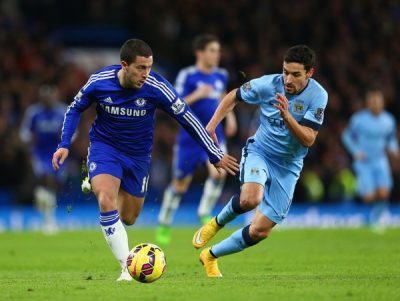 Manchester City vs Chelsea – One of the most intriguing tactical battles is set to happen on 3rd December, Saturday at the Etihad when Manchester City host Chelsea in an English Premier League fixture.

Pep Guardiola and Antonio Conte will face each other as managers for the first time in the premiere game of the weekend as league leaders Chelsea will aim to get one over Manchester City. Having already lost big games to Liverpool and Arsenal, following which Conte switched Chelsea’s tactical setup, the London club will be eager to establish their supremacy in this crucial away fixture.

Manchester City are third in league standings with thirty points, trailing Chelsea by only one point and it would be riveting to see what Pep Guardiola comes up with, to stop the free-flowing Chelsea side.

Both clubs will be without their respective captains – Vincent Kompany and John Terry. Raheem Sterling and Fabian Delph will face late fitness tests. Chelsea will also be without Kurt Zouma, Marco van Ginkel and John Obi Mikel who are yet to regain match fitness.

According to Manchester City vs Chelsea H2H Stats, the last five matches between these two clubs have resulted in two wins and one loss for Manchester City, the other two ending in draws.

While Chelsea have won their last seven league games on the trot, scoring nineteen goals and conceding only one goal, Manchester City have drawn their last three home matches. The result would depend on how Guardiola counters Chelsea’s wingbacks and how Conte’s Chelsea contend with Manchester City’s pressing.

There have been ‘under 2.5 goals’ scored in Chelsea’s last three away matches and Manchester City’s last three home games. It should be a closely contested affair with 1-1 being the most probable outcome.