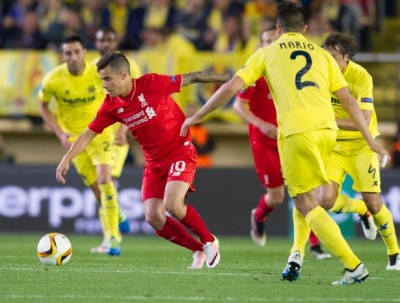 Liverpool hosts Villarreal at Anfield on 5th may, Thursday in the second-leg of their UEFA Europa League semi-finals as Jurgen Klopp’s side aims to overcome a single goal deficit.

Villarreal won the first leg courtesy an injury time goal from substitute Adrian Lopez which put Liverpool at a slight disadvantage for the return leg. The Spanish club has already secured UEFA Champions League qualification for next season and a positive result tonight will equate to success on both domestic as well as European front.

Submit your prediction for Liverpool vs Villarreal.

Jordan Henderson, Joseph Gomez, Danny Ings, Divock Origi and Jordan Rossiter are sidelined through injuries for Liverpool. Emre Can has returned to training and is expected to be a part of the matchday squad. Mamadou Sakho is suspended, having failed a drugs test.

Villarreal have a completely healthy squad, with Leo Baptistao and Eric Bailly having recovered from their injuries.

“If we play our best then we can go to the final. These players gave me a lot of positive signs about their qualities. We are ready. All we did since October was to be perfectly prepared for a game like this. We are not expecting a guarantee to go to the final. We are expecting everything and see what we get for it.”

“We come here full of hope. We are going to give everything we have got and enjoy ourselves. We feel we have the capabilities to make it through to the final. Liverpool as a club have an extraordinary squad of footballers when you consider Benteke cost the whole turnover as Villarreal as a club.

But this group of players needs to be proud of what they have achieved as we have already qualified for the Champions League. This is an occasion to be celebrated.”

According to Head-2-Head statistics, the previous two meetings between these two clubs have resulted in one draw and one win for Villarreal. Villarreal are undefeated in their last twelve games in the UEFA Europa League.

It should be a closely contested affair, but Liverpool are likely to win 1-0 at home, with the match going into extra-time and penalties for the finalist to be decided.