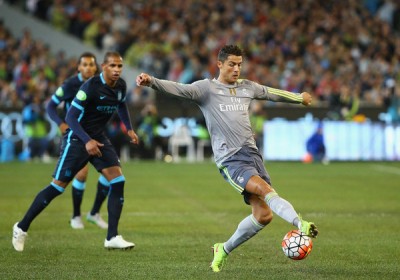 A positive result for the English club will not only allow Manuel Pellegrini’s side create history, but it will also help the UEFA co-efficient of the English clubs which plays a crucial role in the number of clubs qualifying for Europe’s premier competition every season.

Diego Simeone’s Atletico Madrid, who knocked out Bayern Munich courtesy the ‘away goal’ rule last night, would look forward to the result as Real Madrid’s progress will provide the Spanish club with a chance for their Champions League final defeat two seasons back.

Submit your prediction for Real Madrid vs Manchester City

Karim Benzema and Casemiro are doubtful for the match. David Silva and Pablo Zabaleta are sidelined through injuries while Samir Nasri is ineligible.

“Casemiro and Karim Benzema are different cases, we don’t want to risk Benzema at the moment and Casemiro has a slight problem. However we have a big squad that can help us cover all options.”

“The pressure is high in the Bernabeu, so it is important that we are focused. But we have the personality, mentality and the football to be able to deal with that. This is a big game for the club and I know how lucky we are because it’s not every season that you play in semi final of the Champions League.

A special moment for the players and club, but the moment will only be special if we go through. We’re ready for it and we’re looking forward to making history.”

It should be a closely contested affair but Real Madrid are likely to go through to the finals, with a 2-1 win in favor of the hosts being the most likely outcome of this match.

If you would like to be a premium soccer tipster, submit your prediction for the game between Real Madrid and Manchester City.