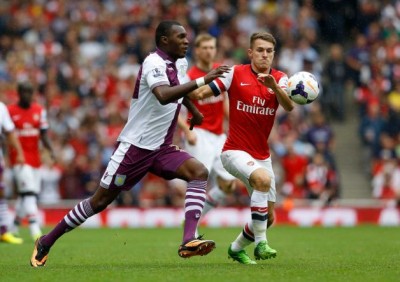 Arsenal will face Aston Villa in the first of the “Showpiece Saturday” finals, with Wolfsburg, Dortmund, Barcelona and Athletic Club Bilbao set to take the field later in the day for the finals of the DFB Pokal Cup and Copa del Rey respectively.

Arsenal will aim to defend their FA Cup title as Arsene Wenger’s men come face to face with Tim Sherwood’s Aston Villa in the final of the world’s oldest domestic cup competition. The match will kick off at 17:30 BST at the Wembley Stadium, London.

Tim Sherwood has been dubbed as a miracle worker after the former-Tottenham manager not only helped the relegation-threatened Aston Villa in securing another season of top flight status, but also led them to the FA Cup finals. Sherwood’s reign has already been dubbed a success in Villa Park and a FA Cup triumph would only add to the myth of the eccentric manager.

Arsenal have been in exceptional form since the turn of the year, but failed to live up to their billing as Chelsea walked away with the Premier League title. Minor stumble in the last few weeks meant Wenger’s men had to remain content with a third-place finish. But successfully defending the FA Cup title would definitely help the Gunners end the season on a high.

Arsene Wenger will be without the services of Danny Welbeck as the Englishman failed to recover in time from a knee injury. Mathieu Debuchy (hamstring), Alex Oxlaide-Chamberlain (hamstring) and Mikel Arteta have all returned to training for the Gunners in recent weeks and are expected to feature in the matchday squad, although either of these three look unlikely to start. Wenger will decide on whether to start Wojciech Szczesny, who has been the No. 1 in Arsenal’s cup fixtures this season or David Ospina, who has had an incredible season in goal. Theo Walcott might be in the starting XI, although the pacy winger has acted mostly as an impact substitute in Arsenal’s last few matches.

Shay Given, who missed Villa’s game against Burnley due to a groin injury, has returned to training and is expected to resume his keeper duties. Aly Cissokho (groin), Kieran Richardson (calf) and Jores Okore (knee) have also trained and will be in the substitute’s bench at least. Ciaran Clark’s (knee) absence has been confirmed by Sherwood while Libor Kozak remains sidelined as he continues to recover from a broken leg.

Arsenal comfortably won both the league games against Aston Villa by a combined score of 8-0. The odds favour an Arsenal win by 1.57 and an Aston Villa win by 6.5. The Gunners are expected to clinch their record-breaking 12th FA Cup against Aston Villa, who have made it to the FA Cup finals for the first time in 15 years, by a scoreline of 2-1.