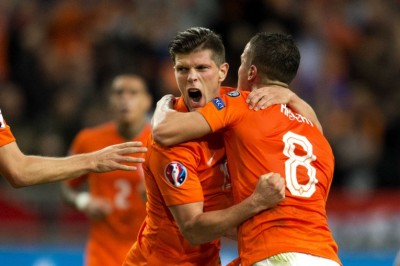 Netherlands travel to Kazakhstan in a last ditch attempt to qualify for the UEFA Euro 2016. The 2014 FIFA World Cup semi-finalists sit at the fourth position in Group A with 10 points and must win both their remaining matches, while hoping for Turkey to lose theirs. Kazakhstan are still looking for their first win as they remain at the bottom of the group table with just two points in eight games.

Kazakhstan are without a victory in 11 competitive outings (three draws and eight losses) since a 2-1 home success against the Faroe Islands, but will be high on confidence after their draw against Iceland last month. Holland, meanwhile, have lost three of their last four away games in the qualifiers, having failed to score in their previous two encounters.

According to Head-2-Head statistics, Netherlands have won all their previous matches against tomorrow’s opponents. It will be an uphill task for Danny Blind’s men to qualify for the UEFA Euro which will take place in France next year, but they should comfortably win against Kazakhstan.

“It’s out of our hands now but we still have a chance. There are still two qualifiers left to play and we have to win them both. I believe Turkey will definitely drop points in their last two games. It is now up to us to ensure we bag the full three points in both of our last two games. That is all that matters. It is not important how we win, so long as we win.”