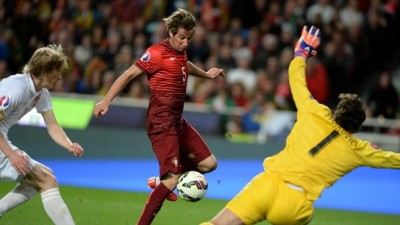 Serbia host Portugal at Stadion Partizana, Belgrade in a Group I encounter as the UEFA Euro 2016 qualifiers step into Matchday 11. Portugal have already qualified for the upcoming UEFA Euro to be held in France next year, winning six of their seven matches in qualification. Serbia, meanwhile, are languishing in the fourth position with just four points and will hope to end with a victory.

Radovan Curic will be without Branislav Ivanovic and Nemanja Matic, with both Chelsea players picking up hamstring injuries during the Eagles’ 2-0 win over Albania. With qualification already sealed, experienced campaigners like Cristiano Ronaldo, Joao Moutinho, Fabio Coentrao are likely to be rested by the Serbia manager.

According to Head-2-Head statistics, Portugal have won 67% of its encounters with Serbia.

The last time these two teams met, an insipid draw was played out. Serbia are without a competitive victory in their last five matches in Belgrade while Portugal have won their last three away qualifiers. Although it should be a closely contested affair, Portugal must comfortably win against Serbia.

We are delighted to have reached this goal. For the Euros let us think game by game. We have a great squad, but we know that there will be other great teams. We will do our best to get as far as possible and that involves trying to play in the final.