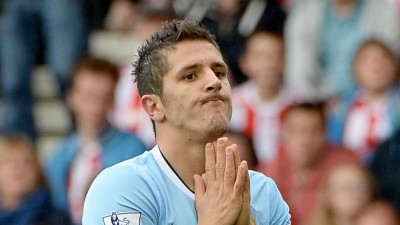 Inter Milan have added Stevan Jovetic to their list of summer additions, after the club agreed a fee with Manchester City for the forward. The Bosnia-Herzegovina international will join the Serie A club on a season long-loan, followed by a permanent move next summer.

Roberto Mancini have been extremely active in the transfer market this summer, strengthening the squad on all fronts, in order to mount a challenge for European qualification in the upcoming season. Geoffrey Kondogbia has arrived from Monaco with a hefty €28m price tag, as has Xherdan Shaqiri from Bayern Munich in a €16m transfer.

Jovetic’s arrival will boost Inter’s chances to qualify for UEFA Champions League as the 25-year-old is a proven goalscorer in Italy. The forward became a renowned name in Europe during his time at Fiorentina. Having joined Manchester City in the summer of 2013, Jovetic failed to lock down a place in the starting line-up. Jovetic made just eleven starts and scored eight goals in two seasons worth of Premier League games. Injuries and subsequent loss of form constantly plugged the once sought-after Jovetic.

“Unfortunately Stevan had to go. He’s a very good player, one of the best players I have seen, but for him he had too many injuries and that’s why he couldn’t play too many games in a row. I wish him the best for the future and I’m sure he’ll be a very important player for Inter.”

Manchester City will receive £2m in loan fee this season, followed by £10.25m next summer, with the fee rising to a potential £14.25m after add-ons.