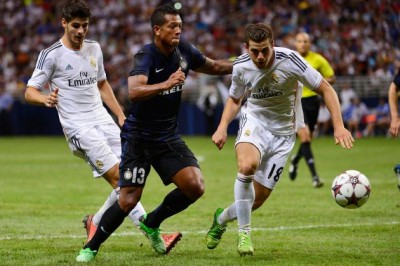 Cristiano Ronaldo and Gareth Bale both started for the Spanish club, but Karim Benzema and Luka Modric missed out. Instead, Casemiro and Jese featured in the starting line-up, with the latter scoring the first goal of the match.

Real Madrid took the lead just before the half-hour mark when Jese Rodriguez got on the end of Marcelo’s cross and controlled it, before netting the ball with a clinical finish. Rafael Varane doubled the lead with a side-footed volley of Lucas Vazquez’s set piece delivery in the second half. James Rodriguez capped off the win with a vintage long-distance curling free kick two minutes before full time. Rodriguez has an excellent first season at Madrid in 2014/15 and will look to build on the foundations already laid.

Real Madrid started slowly but stamped their authority as the match progressed. It was apparent that Benitez is yet to find the tactical system suited best to the side he has inherited, but still Real Madrid were strong enough to comprehensively see of Inter Milan, who have made quite a few signings of their own this summer. The Galacticos displayed the balance of the side, even when the youngsters Lucas Vázquez, Denis Cheryshev, Nacho, Varane and Kiko Casilla took the field after break. Combined with the midfield fervour, was offensive exuberance and exquisite passes, which could have resulted in an even more embarrassing scoreline for the Serie A club, if not for their goalkeeper Samar Handanovic.

Inter Milan have made some crucial signings this summer, although the players are yet to thoroughly execute their assigned responsibilities. Moreover, the match once again showed the current standards of the club which was considered an European great till a few seasons back.

Although Rafael Benitez has received criticism from a lot of corners due to his interactions with the club’s star players and approach in the transfer market, Real Madrid have looked strong so far and are all set to mount a challenge for the La Liga title in the upcoming campaign.

Real Madrid have already won the Australian edition of the International Champions Cup and could add another pre-season trophy to their cabinet, should they defeat AC Milan on Saturday.