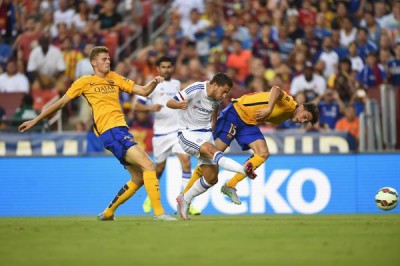 Chelsea defeated Barcelona on penalties in their final match of the International Champions Cup, after the scoreline read 2-2 post normal regulation period of ninety minutes. Thibaut Courtois, whose heroic efforts in the penalty shootout against Paris Saint-Germain help the Premier League champions win against the Ligue 1 Champions on Saturday, was once again at the forefront during the spot kicks today.

Eden Hazard opened scoring for Chelsea with a brilliant individual effort in the tenth minute, which once again showcased why Hazard was the PFA Player of the Year last season. Skipping past four Barcelona challenges, Hazard buried the ball past a hapless Marc Andre Ter-Stegen. Chelsea were buoyed by Hazard’s goal and played some of their best football of the pre-season in the succeeding minutes, but their defending woes continued. Luis Suarez was in sensational form as usual, his sublime touches and sudden changes of pace troubling Gary Cahill. Suarez chipped the ball over Courtois to equalize for Barcelona, although Kurt Zouma made a solid effort to clear the ball off the goal-line.

Diego Costa picked up a hamstring injury soon after, in what would be a cause of worry for Jose Mourinho. Sandro Ramirez put Barcelona in the lead minutes after that with a curling effort from the long-range which lodged into the far corner of Courtois’ goal. Ramires had a wonderful chance to equalize for Chelsea, but scuffed his shot inches wise off the post. Falcao played a good cameo coming on for Hazard in the second half, his link-up play once again on display.

Gary Cahill headed home the equalizer, during a poor judgement by Barcelona’s third-choice goalkeeper, but the English defender had to immediately leave the pitch with a bleeding nose. Both sides had a few late chances to settle the match but the game eventually went to penalties.

Thibaut Courtois’ composure under pressure eventually helped Chelsea win the shootout as the Belgian made a save off Gerard Pique. Teenage star Halilovic had earlier hit the bar with his attempted paneka. As Loic Remy buried his spot kick, Chelsea claimed a win.

As Jose Mourinho reiterated in his post-match interview, the game was simply a means to simulated training before the actual season starts and the ultimate aim was for players of both sides to regain match fitness and sharpness of the ball. Having started their pre-season with a loss against New York Red Bulls, the Portuguese manager would however be pleased with the outcome of Chelsea’s last couple of matches.