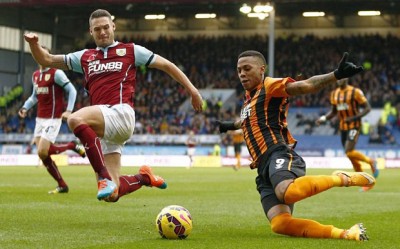 Burnley, the prime contenders for the wooden spoon in the Premier League travel to KC Stadium to face Hull City, who are relegation threatened as well. Steve Bruce’s side is in a slightly better position than the Clarets, in spite of their defeat against Arsenal on Monday.

Hull City are in 17th position with 34 points while Burnley are last with just 26 points.

Robert Snodgrass and Curtis Davies are confirmed absentees due to injuries while David Meyler and Mohammad Diame remain a doubt for Hull City. Kevin Long and Dean Marney are sidelined for Burnley. Sam Vokes will face a late fitness test, before his inclusion in the matchday squad is confirmed.

Hull prefer a 3-5-2 with Andrew Robertson and Ahmed Elmohamady as the wingbacks. Nikica Jelavic may partner Dame N’Doye up front, while Stephen Quinn, Tom Huddlestone and Jake Livermore don the midfielders’ roles.

Sean Dyche has usually set up Burnley in a 4-4-1-1 and it looks unlikely to change. Danny Ings and Ashley Barnes will be tasked with creation and putting away of chances while George Boyd, Scott Arfield, David Jones and Matthew Taylor form a bank of four, in front of the Burnley backline.

Hull has won only 16% of its previous six meetings against Burnley. Lady luck has not favoured the Clarets at any point this season, but this is the crunch game for Dyche’s side as anything but a win this weekend will annihilate all chances of Burnley’s survival. On current form, Hull City may beat Burnley by 2-1.