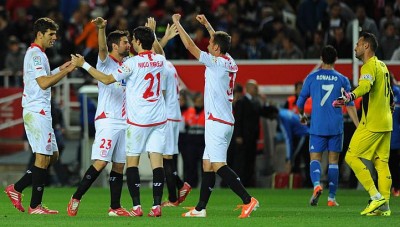 The first leg of the UEFA Europa League semi-finals get underway on Thursday evening, as two clubs from Italy, one from Spain and one from Ukraine contest for the smaller of the European cups, a competition victory in which could guarantee Champions League qualification next season.

Sevilla host Fiorentina at Ramon Sanchez Pizjuan stadium, in a bid to reach the finals of the Europa league.

Sevilla have no missing players. For Fiorentina, Giuseppe Rossi and Khouma Babacar will be absent through injuries. The Spaniards prefer a 4-2-3-1 and Vitolo, who was rested in the defeat against Real Madrid should be back in the starting XI. Carlos Bacca will lead the line, with Ever Banega and Alexis Vidal in the midfield. While Stephen M’Bia is the designated holding midfielder for Sevilla, Benoit Tremoulinas and Coke will be the fullbacks marauding forward.

The Italian side have some injury concerns and hence Vincenzo Montella may start the team which won 2-0 against Dynamo Kiev in its last Europa League outing. Borja Valero, David Pizzaro and Matias Fernandez will play in the midfield, while Mario Gomez, Mohammad Salah and Joaquin lead the attack. Mohammad Salah, who is on loan from Chelsea, have been in tremendous form for Montella’s team and the Italian side will once again turn to the Egyptian to work his magic.

Despite the loss against Real Madrid, Sevilla are in fine form and the odds favour a Sevilla win by 1.8, a draw by 3.8 and a Fiorentina win by 4.75. Sevilla are favourites to win the first leg 3-1.