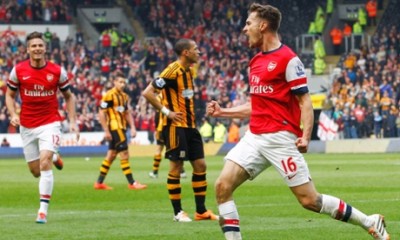 Arsenal travel to KC Stadium to face Steve Bruce’s Hull City on Monday, as they look to secure the runners-up position in the Premier League behind Chelsea. By the time Wenger’s men take the field, the league could already be decided with Chelsea playing on Sunday afternoon against Crystal Palace. Hull are still relegation-threatened and Bruce will be worried with both Sunderland and Leicester taking three full points from this weekend’s fixtures.

Nikica Jelavic, Robert Snodgrass and Curtis Davies are still unavailable for the Tigers through injuries. David Meyler will return from suspension. Alex Oxlaide-Chamberlain and Mathieu Flamini are listed as doubtful for the Gunners.

Steve Bruce might field the same side which carved out back-to-back victories against Crystal Palace and Liverpool. Sone Aluko and Dame N’Doye will start up front with Stephen McQuinn, Tom Huddlestone and Jake Livermore in the central midfield. Hull have been playing Paul McShane, Michael Dawson and James Chester at centre-half with James Brady and Ahmed Elmohamady providing width.

The long-term injury absentees are starting to regain match fitness for Arsenal and Wenger could afford to rest one of Per Mertesacker or Laurent Koscielny. The Gunners will start in their usual 4-1-4-1 with Francis Coquelin and Santi Cazorla in central midfield. Danny Welbeck might get a run-in instead of Olivier Giroud up front. Captain Mikel Arteta might make the substitute’s bench as well.

Although Hull City are in a rich vein of form, the odds are in favour of Arsenal with bookmakers providing odds of 1.73 for an Arsenal win, 3.8 for a draw and 5.5 for a Hull victory. Arsenal will clinch the tie 3-1.