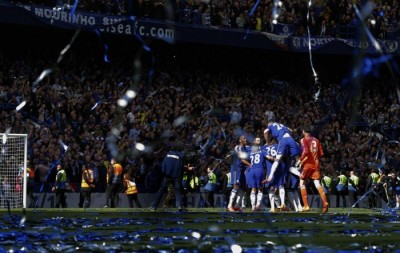 Jose Mourinho’s Chelsea were crowned 2014/15 English Premier League champions after Eden Hazard’s goal against Crystal Palace sealed a victory for the London club who hopped to 83 points with three games to go, accomplishing an unassailable lead in the process.

Chelsea were deemed the favourites right from the word “go” and they lived up to their top billing all through the season. The Blues started the season with a flourish, outplaying teams at will and putting up stunning displays across the country. As the season progressed and matches started to come thick and fast, Chelsea invariable slowed down courtesy the lack of rotation in the small squad and a high-tempo style of play. Injuries to key players and a loss of form for some prompted Mourinho to employ another tactical system and Chelsea began to close games with utmost efficiency.

An early exit from the FA Cup and two disappointing showings against Paris Saint-Germain notwithstanding, Chelsea began to demonstrate that they definitely had another gear within themselves. As Manchester United and Arsenal threatened to close in on the lead, having finally hit their stride late into the season, Chelsea ruthlessly began to play for three points. There could be criticism from supporters of rival clubs, there could be nervy moments with some games requiring Mourinho’s side to dig in deep until the winner came in the last few minutes, but one thing was evident – there was no way Chelsea were giving up on their chances of winning the Premier League title.

For the first time in the last few years, the battle for the Premier League title has been so much dominated by a single club, over the course of the season. Arsenal produced its moments when it began his hot streak of form in February, Manchester United showed glimpses of its glorious past, Manchester City levelled Chelsea on points at the half-season mark, but never did any of the other contenders actually come on par with Mourinho’s side.

Chelsea’s win might not have pleased everyone, but one needs to realize that this was a team which has shown all through the season, its capability to grind out a win, irrespective of the conditions. While the likes of Cesar Azpilicueta and Gary Cahill, led from the front by John Terry ensured defensive solidarity, Eden Hazard was adjudged the PFA Player of the Year for his 14 goals and 8 assists. Thibaut Courtois, Cesc Fabregas and Diego Costa have had wonderful debut seasons and it should be a frightening aspect for the rivals to consider that what this side can achieve in future, when they strengthen themselves further in summer.