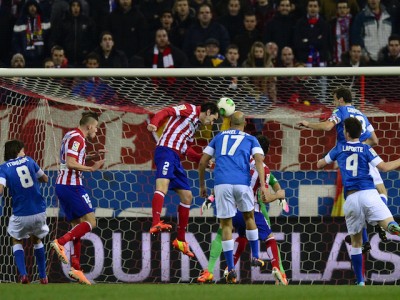 Atletico Madrid will host Athletic Club Bilbao at Vicente Calderon on Saturday in Matchweek 35 of La Liga. Atletico Madrid have opened up a gap in the points table from the rest of the league and will look to consolidate their position among the UEFA Champions League qualifiers.

Diego Simeone has a completely healthy side and none of the players are suspended either. Athletic Bilbao will miss Iker Muniain and Iber Gomez through injuries though.

Fernando Torres is unlikely to start again in spite of his crucial goal in the last match. Atletico is expected to line up in a 4-4-2 with Antoine Griezmann and Mario Mandzukic up front. Koke, Tiago, Gabi and Arda Turan are the first choice midfield for Simeone. For Athletic Club Bilbao, 4-2-3-1 is the usual formation. Xabier Etxieta will take his place in the backline, after serving out his suspension. Mikel Rico, Benat and Mikel San Jose are likely to start in central midfield. Aritz Aduriz will lead Athletic’s goal charge up front.

Atletico have won 8 of their last nine home matches in the La Liga and look set to continue their unbeaten run at home. Athletic are struggling on current form with just two wins in the last six matches. Los Leones have also lost their last three away matches.

According to H2H statistics, Atletico have won 57% of its matches against Athletic Club Bilbao. Moreover, the odds favour Atletico Madrid at 1.444, a draw at 4.5 and Athletic Bilbao at a lowly 8.5, according to SoccerPunter Tipsters. So, Atletico could win by a 2-0 margin.