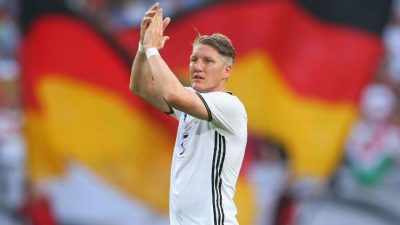 Germany host Finland at Borussia Park on 31st August, Wednesday in an international friendly which marks the last appearance of German legend Bastian Schweinsteiger for his country. The 32-year-old FIFA World Cup winner had participated in seven major international tournaments for his country.

The retirement of Bastian Schweinsteiger, a German football legend in his own right marked the end of an era for Germany, whose national side has seen tremendous changes in its ranks since winning the World Cup in 2014. Schweinsteiger announced his retirement soon after Germany won the World Cup, but Joachim Loew called back the midfield general for a testimonial game.

In spite of being an international friendly tasked with crowning the occasion of Schweinsteiger’s retirement, the match between Germany and Finland will also be the last international fixture before the defending champions begin their qualifying campaign for the 2018 FIFA World Cup.

“I’m still very, very happy with the number of games I played for Germany. I’m pleased to have been given the opportunity to play a testimonial.

I always wanted to play at Euro 2016 and that was my aim, and then during my holidays I asked myself if I could keep the same passion of the 2014 World Cup at another World Cup. I was honest with myself and answered ‘no’. You need to be a bit consequential and I decided this way.”

Finland, one of the smaller powerhouses of European football, are in dire need of a win having lost five of their last six fixtures, scoring only a single goal. According to Head-2-Head statistics, Germany have never lost any of their matches against Finland till date.

Germany’s clash with Finland in Monchengladbach on is a warm-up for their opening World Cup qualifier against Norway in Oslo at the weekend. The German club will start as clear favorites and are likely to win 3-0 against Finland.