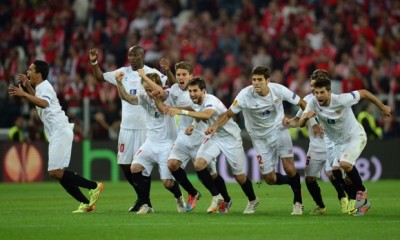 Dnipro Dnipropetrovsk will face Sevilla at the Stadion Narodowy, Warszwawa in the finals of the 2014/15 UEFA Europa League on 27th May, 2015. Dnipro have been the surprise package of the Europa League this season, beating European stalwarts Ajax, Napoli, Olympiakos, Club Brugge in the road to the final. Sevilla, meanwhile have continued to assert their supremacy in the Europa League, making it to the finals for the second consecutive season.

The Spanish side, who are the Europa League holders, would also look to defend their title as Dnipro will aim to pull an upset. Los Rojiblancos have experience on their side as they have repeatedly succeeded at this level. The Ukrainian side, on the contrary, will be playing their first major European final tomorrow and nerves will be expected to set in.

As for team news, Dnipro will miss the services of Serhiy Kravchenko (knock) and Roman Zozulya (knee), while Sevilla have a doubt over Nicolas Pareja (knee). The added incentive for both clubs will be that the UEFA Europa League champions will get automatic qualification to UEFA Champions League next season, so the clubs have more revenue to play for, in addition to bragging rights.

Unai Emery, who led Sevilla to European glory last season after the Spanish side beat Benfica on penalties in the final, has reiterated the importance of winning the final for Sevilla in his interview to UEFA. Myron Markevych will also hope his side finishes their season on a high after Dnipro finished third on the Ukrainian Premier League standings.