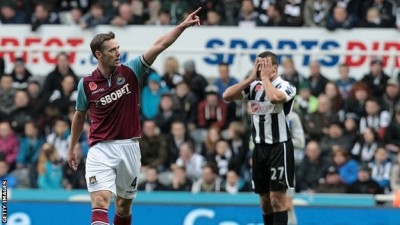 West Ham United FC will compete in the UEFA Europa League qualification round with 103 other teams, starting July 2nd, 2015. West Ham have got this unique opportunity to compete in Europe, courtesy their first-position finish in the Premier League Fair Play League.

The Hammers had an interesting Premier League campaign in the recently concluded season. They flirted with UEFA Champions League qualification in the middle of the season, when the London club was flying high, but eventually finished 12th in the league standings. West Ham’s middle-of-the-table finish simply do not reflect their poor performances through the entirety of the second half of the league.

The Hammers won only three matches since the turn of the year. Two of those wins came against Burnley and Hull City, both of which teams got relegated. It was not just a matter of the results, but the manner in which West Ham played in those particular games. The London club finished the Premier League in the lowest possible fashion for a team of its stature, losing 2-0 to Newcastle United who have had their own set of problems since Alan Pardew’s departure.

Sam Allardyce’s departure due to a non-renewal of contract was announced minutes after their last match of the season. The Hammers are currently on the look-out for a new manager, with names like David Moyes and Jurgen Klopp being mentioned. West Ham did not perform particularly well in either of the domestic cup competitions last season, losing to Sheffield United on penalties in second round of the League Cup and to West Bromwich Albion in the fifth round of the FA Cup.

The West Ham supporters would definitely get a boost in their morale with the news breaking about possible qualification to the Europa League, as European football could return to Upton Park in the club’s last season at the Boleyn Ground.

“We are delighted to have won a place in the UEFA Europa League as we want to ensure the Boleyn Ground the best send-off possible, and progress in this competition will certainly help with that.”

“Starting in early July will bring its challenges, but everyone at the Club, from the Board to the players and supporters will be relishing the opportunity to feature on the European stage. It should be a fantastic experience.”

The last time West Ham played in Europe was eight years ago in 2006/07 season and the player and the fans alike will hope to contest among the top tier of European clubs once again.