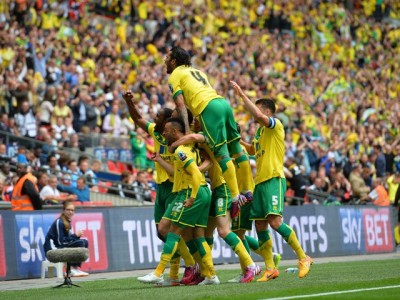 Norwich City will return to English Premier League in 2015/16 after the Canaries defeated Middlesborough 2-0 in the Championship Playoff Finals. Alex Neil’s side annihilated Middlesborough in a 15-minute spell at the beginning of the game which put them 2-0 up before both sets of supporters could settle down and stunned Aitor Karanka’s side into a stupor from which they could not recover.

Neil had proclaimed how Norwich would benefit from the emotionally taxing two-legged semi-final against Ipswich Town and as has been the case repeatedly this season, the 33-year-old was proved right. Norwich played like it already belongs to the Premier League and secured the third promotion spot in addition to AFC Bournemouth and Watford FC.

Middlesborough boasted off the stringiest defense in the Championship, having conceded just 37 goals during the regular season. The backline which had held up so well through the season, crumbled in face of excruciating pressure today. Rookie mistake from Daniel Ayala, a lapse in decision making from Ben Gibson, and an ordinary showing from goalkeeper Dimitrios Konstantopoulos summed up Boro’s final. Karanka’s team just could not handle the pressure and Norwich City who have been on an up-surging run off late, took their chances. Goals from Cameron Jerome and Nathan Redmond at the 12th and 15th minutes were enough for the Canaries to mark a return to the top flight.

Neil had earlier said how crucial it was to create and take chances before the Boro defense settled down and his players followed his instructions to the letter, with young winger Nathan Redmond shining brightly. Middlesborough tried to get back in the game, especially with their attacks through the middle, but Norwich held firm. Boro weren’t helped by the fact that their top scorer and Championship player of the Year, Patrick Bamford who is on loan from Chelsea FC couldn’t break the shackles of the Norwich defense.

After dropping down to the Championship last season, courtesy their 18th position finish in 201314 English Premier League, it was not all hunky-dory for the Canaries but the appointment of Alex Neil has given way to a confident time at the Carrow Road, after the tumultuous periods under the likes of Chris Hughton and Neil Adams. Norwich have very deservingly made the jump to the top division, after they finished 3rd in the Championship standings with 86 points. Middlesborough fans, though disappointed from the defeat, will take heart from the fact that the club has progresses by leaps and bounds in the short reign under Karanka.

With a little more than two months to go for the new Premier League season, the key for Norwich City will be to have a fruitful summer transfer window in order to make a substantial bid for survival next season.