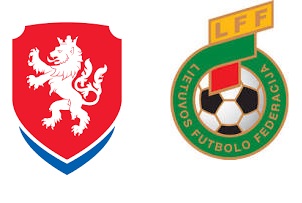 After a poor performance at the Euro 2016, the Czechs team is working on getting back on their feet. Unfortunately for them the new head-coach has had an abysmal World Cup qualification campaign so far, with just 5 points from their first four matches.

In preparations for their next World Cup Qualification Czech Republic would play against Lithuania in an International Friendly encounter.

With a 3-0 loss in Germany and goal-less draws against Northern Ireland and Azerbaijan. They had their first win against Norway, but that couldn’t guarantee them a good position as they occupy fourth position in their group.

And for their Lithuanian counterpart we can be sure that so far, they have had a magnificent start to the 2018 World Cup qualifiers. With 5 points in four matches we can say its a good performance so far. This includes 2 draws, 1 Win and a Loss to Slovakia.

There have been 6 different encounters between the two teams and none of them ended in a draw. Czech Republic leads with 5 wins as against one defeat, with Lithuania scoring only 2 goals in all meetings.

Comparing both teams we can say that the Czechs are a better side, Except for goal scoring. With very few experienced players at the international level and Goal-Deficit strikers, the workload is shifted to the mid-fielders.

A good performance from the Home side could see them scraping a draw from this game like they did with Northern Ireland and Azerbaijan. If the away team decide to go with a strong defense line as expected, they are unlikely to score a goal.