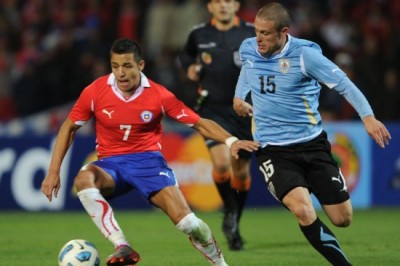 Chile will face defending champions Uruguay in the first quarter-final of the 2015 Copa America at 12:30 a.m. BST on 24th June, 2015 (Wednesday) at Estadio Nacional, Santiago. Hosts Chile were the first team to qualify for the knockout stages after they defeated Bolivia 5-0 in their last group fixture and won Group A with seven points. Uruguay finished with 4 points, in the third position in Group B and made it to the next round.

Both teams have been handed an easy way to the finals of the 44th edition of Copa America, as the winner of the quarter-final tie do not face Argentina or Brazil until the finals. Should they win, Chile or Uruguay will come up against Bolivia or Peru in the semi-finals.

Uruguay captain Diego Godin will resume his role as a centre back, pushing Sebastian Coates into the bench. Abel Hernandez (Hull City forward) is expected to keep his place. Alvaro Perreira will serve his one-game suspension after picking up two consecutive yellows.

Chile’s Matias Fernandez has failed to win back his place after he was suspended, following his red card against Ecuador and might feature as a substitute again, akin to his role in the Bolivia game.

Chile’s current form flatters them as the hosts annihilated Ecuador and Bolivia, playing out a high-scoring draw against Mexico, a match they should have won, if not for controversial officiating decisions. Although Arturo Vidal has hurt his reputation off the pitch, the Juventus man has been Chile’s epitome on pitch, throughout the tournament.

Oscar Tabarez’s Uruguay have struggled to get going and problems have cropped up in attacking as well as defence, with the teams suffering from a distinct lack of cohesion.

La Celeste are the favourites for this quarter-final tie as they are the top scorers with ten goal in the tournament, Arturo Vidal jointly leading the tally charts. Uruguay, on the contrary, have scored just twice. The defending champions are missing Luis Suarez’s influence, especially due to Edinson Cavani’s poor form.

According to Head-2-Head statistics, Chile have won 16.7 % and lost 50 % of its matches against Uruguay. The hosts should win this tie after a close 2-1 affair.