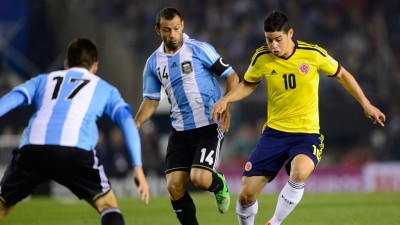 Copa America favourites Argentina will face Colombia in the third-quarter final at Estadio Sausalito, Vina Del Mar on 26th June, 2015 (Friday), with a prospective semi-final clash with Brazil looming in near future.

Argentina qualified as winners of Group B with 7 points, while Colombia came third in Group C with 4 points (behind Brazil and Peru) and qualified alongside Uruguay as the two third-ranked teams of the round-robin stage.

Edwin Valencia had limped off against Peru and Alexander Meija could start in the midfield for Colombia. Carlos Sanchez is suspended and will miss the encounter.

Argentina are still unbeaten in the tournament. Although the trio of Messi, Aguero and Di Maria have failed to dazzle so far, the Albiceleste have put in noteworthy displays, if the blip against Paraguay is forgotten.

Colombia have already proved their might, pushing Brazil to a defeat and in spite of the fact that Radamel Falcao has barely registered three shots on target in the entire tournament, the Colombian side is capable of beating any side on its day.

“It is always more difficult to play an opponent that waits with all their players at the back, than one who chooses to go in search of your goal. They (Colombia) also have talented players up front and will try to create their own spaces. If that happens it will be a two-way game.”
Angel Di Maria, Argentina

“We have to be focused and calm, that will be vital. It is also important to maintain a winning mentality.”
Jeison Murrilo, Colombia

Colombia have already pulled off an upset by winning against Brazil, in spite of the controversies which marred the tie. Argentina have a chance to equal Uruguay’s record of 15 Copa America titles, should they manage to win this year.

According to Head-2-Head statistics, Argentina have won 58% and lost 17% of its matches against Colombia till date. The odds favour a La Albiceleste win at 1.85, a draw at 3.4 and a loss for Messi’s side at 5.25. It should be a closely contested affair, but Argentina should prevail with a 2-1 scoreline.