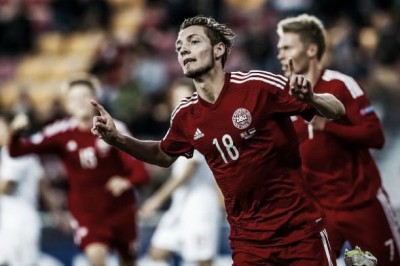 Denmark defeated Serbia 2-0, progressing to the semi-finals of the UEFA Euro U21 for the first time, on their third attempt nonetheless. Jess Thorup started a team full of experienced internationals, a move which paid off dividends.

Bayern Munich’s Pierre Højbjerg was at the crux of Denmark’s virtues last night. Not only did the Dane set up both the goals of the game, but he displayed an all-round performance. Starting as a deep-lying playmaker, he later morphed into the role of a forward. His devastating attacking play down Denmark’s left flank caused Serbia problems throughout the entire ninety minutes.

Denmark’s opener came through Rasmus Falk off a Højbjerg cross. Serbia rarely threatened, with only Miloš Jojić and Filip Djuričić going close to scoring, the former denied by Jacob Busk and the latter pulling his short inches wide of the post. Viktor Fischer eventually killed the game with the second goal, off a setpiece delivery from Højbjerg.

Germany held firm against Czech Republic, knocking the hosts out of the competition after a 1-1 draw. In spite of shared points, this encounter proved to be a more thrilling affair among the two Group A games. Germany started brightly threatening the Czech goalie from various angles through Kevin Volland, Amin Younes and Matthias Ginter. The hosts came close to scoring the opener as well, as Jakub Brabec’s header beat German goalkeeper Marc-André ter Stegen but was eventually cleared by Julian Korb off his own goalline.

Nico Schulz finally scored the opener for Germany at the 55-minute mark, taking advantage off a miscued Tomas Kalas clearance, but Czech substitute Ladislav Krejčí levelled the score with less than 25 minutes to play. The hosts looked for a winner, but in vain as Germany closed shop and progressed to the semi-finals.

Denmark will play the runners-up of Group B, while Germany face the winner of Group B in semi-finals.