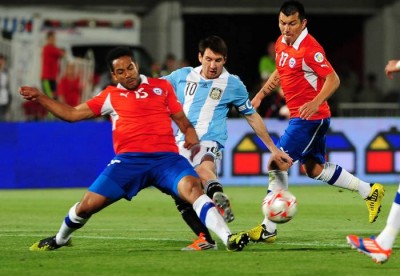 Chile face Argentina in the finals of the Copa America on 4th July, 2015 at Estadio Nacional, Santiago as history beckons both nations. Should the hosts win, it will be La Roja’s maiden Championship in Copa’s 99 year old history. Should Argentina prevail, La Albiceleste will equal Uruguay’s record 15 continental titles.

Jorge Sampoli and Gerardo Martino are expected to start the same starting eleven which won them their respective semi-finals.

Chile’s success in this year’s Copa America has been based upon their team cohesion and technical panache. The hosts have played an exciting brand of football, entertaining the supporters and annihilating opponents. While Alexis Sanchez, Arturo Vidal and Claudio Bravo are undoubtedly the three most important components of this Chile side, others have stepped up when required. The likes of Mauricio Isla and Charles Aranguiz have been crucial to Chile’s progress through the tournament. Eduardo Vargas displayed the realms of his talent when he scored the brace against Peru, which helped Chile qualify for the finals.

Argentina have looked off-colour for most of the tournament. The Albiceleste ultimately had to be content with a draw after scoring two early goals against Paraguay in their group opener and had to rely on penalties to get past Colombia in the last eight. But the star-studded attacking line-up came into its own in the second half of the semi-finals as Martino’s team thrashed Paraguay 6-1. Lionel Messi has scored only a single goal till date but his three assists against Paraguay corroborated the fact that the Argentine is at the heart of everything Argentina creates.

“Winning the cup is everything we want. We were close in the last World Cup, we broke our bad streak of losing in the quarter-finals and we were right there. We are a group of friends who are trying to do the best for our country. On Saturday, with God on our side, we will show everything we have been working for.”
Sergio Romero, Argentina

“We are never afraid of other national teams. We respect them but we do not fear them. We have to do what we have being doing. We have to fight, play as equals. The chance is ours, and with our home fans in the stands that increases our chances of getting closer to the title.”
Claudio Bravo, Chile

According to Head-2-Head statistics, in 12 matches till date, Chile have won only one and lost eight against Argentina. It should be a closely contested affair as the final is an even match between the strength of the two squads. Argentina is likelier to win by a 2-1 scoreline.