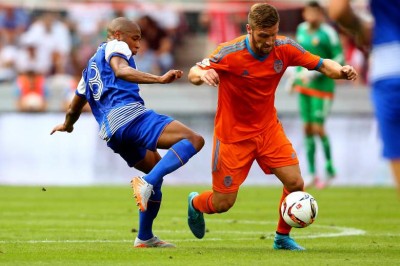 Valencia aim to return to the group stages of the UEFA Champions League after an absence of two seasons, when they take on AS Monaco in Wednesday’s qualifiers at home. This encounter is undoubtedly the most high-profile match among all the UEFA Champions League qualifier ties. Both club will meet at the Mestalla for the first leg, with the reverse fixture scheduled for next week at Monaco.

Valencia will miss the services of the injured Diego Alves and new signing Mathew Ryan is likely to make his debut as the Los Che goalkeeper. Nicolas Otamendi, who is on the verge of a move to Manchester City, will also be absent and Ruben Vezo is the likely candidate to replace the Argentine defender.

Monaco have a few injury concerns of their own. Joao Moutinho did not travel to Spain as the Portuguese mdfielder suffered a sprained ankle during Moncao’s draw against Lille last week. Aymen Abdennour is sidelined through a thigh injury and Layvin Kurzawa is doubtful as well due to an ankle injury.

“When we’re united, we are very strong. I thank the fans on behalf of the club and I hope we can achieve our dream of being in the Champions League. Monaco are a great team, with a squad that can solve problems. We know they’re missing some important players but that won’t be decisive.

It’s important to keep a clean sheet as away goals are a key value but we can’t play only with the intention of not conceding. We have to go for the goals. We have an opponent of a high quality. The team will play for everything because they want to be in the Champions League.”

“We are a strong team and we know how to counter. We will have to defend well and then be strong offensively. It is difficult to play in this stadium as an opponent; Valencia are always formidable at Mestalla. We need two 100 per cent games to advance from this round.”

Valencia have won eight and lost just one match at home against French sides till date. Valencia and AS Monaco have met only once, with the Spanish side beating the French team 5-3 on aggregate in the first round of the 1980/81 European Cuo Winners’ Cup, as reflected in the Head-2-Head statistics. Based on current form, Valencia are likely to win a closely contested affair by a 1-0 scoreline.