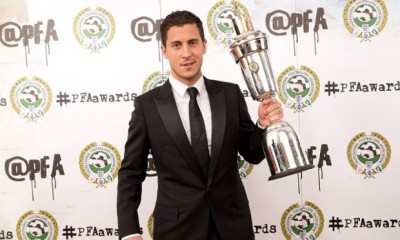 Every season, the Professional Footballers’ Association, the world’s longest established professional sportsperson’s union convenes to award the best performers in the Premier League and the Football Leagues. Last night, the honours were distributed for 2014/15 season with the footballers (former and present), sports industrialists and media in presence.

Chelsea’s Eden Hazard took the top billing, as he won the Player of the Year award on an evening Chelsea all but ensured the league title, nullifying Arsenal. Harry Kane, widely deemed as “the story of the season” walked away with the Young Player of the Year award, after his exceptional season at Maurio Pochettino’s Tottenham Hotspur.

Earlier in the day, the Teams of the Year for the Premier League, Championship, Football League One and Football League Two were announced. Although the chosen teams were mostly expected, a few surprise decisions also came along the way.

Interestingly, only one Watford FC player, who earlier in the weekend won automatic promotion to the Premier League made it to the PFA Championship Team of the Year. The entire list includes Kieren Westwood (Sheffield Wednesday); Simon Francis (Bournemouth), Richard Keogh (Derby County), Russell Martin (Norwich City), George Friend (Middlesbrough); Grant Leadbitter (Middlesbrough); Matt Ritchie (Bournemouth), Bakary Sako (Wolves), Alex Pritchard (Brentford – on loan from Tottenham); Troy Deeney (Watford), Daryl Murphy (Ipswich Town). Patrick Bamford, on loan to Middlesborough from Chelsea, was declared the Championship Player of the Year earlier in the week but failed to make it to the team of the year.

Steven Gerrard and Frank Lampard were honoured with the PFA Merit awards, which are equivalent to the lifetime achievement awards. The women footballers plying their trade in the country also received due recognition, with Chelsea’s star playmaker Ji So-Yun winning the PFA Women’s Player’s Player of the Year 2015. Leah Williamson won the Women’s Young Player of the Year award.

When it came to PFA Men’s Player’s Player of the Year and PFA Men’s Young Player of the Year awards, there were hardly any doubt before the start of the ceremony. Eden Hazard has been in tremendous form all season, carrying Chelsea’s attack on his own shoulders when the others have been injured or out-of-form. For Tottenham, Harry Kane has been the light which has shone the brightest, scoring with a remarkable consistency.

The well-deserving Hazard was his charming self during the acceptance speech.

“I’m very happy. One day I want to be the best and what I did this season is play very well, Chelsea played very well. I don’t know if I deserve to win but it is good for me. It is good, it is better to be voted by the players – they know everything about football. This is good. I’m very happy.” – Eden Hazard

With the business end of the season almost here and a lot of tough battles coming up as promotion and relegation battles are fought, Champions League qualification is decided, the PFA awards surely brought a much needed breath of calm into the charged atmosphere of the English football leagues.