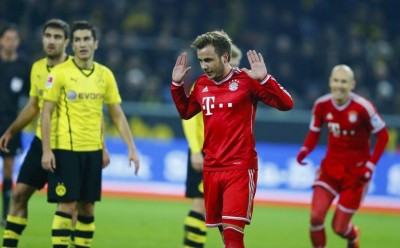 Jurgen Klopp’s Borussia Dortmund will go up against Pep Guardiola’s Bayern Munich in the semi-finals of the DFB Pokal cup, as one last proverbial David vs Goliath battle commences in Munich, this midweek.

Borussia Dortmund has had a dismal season and with Bayern already crowned the Bundesliga champions, there have been few meaningful contests between the two German powerhouses. Klopp, who is departing in summer, would love to inflict one last blow in the armour of Dortmund’s arch rivals before the season ends.

Bayern have been handed a boost as Arjen Robben and Mehdi Benatia both trained and could return on Tuesday. Pep Guardiola has insisted the Dutchman will be in his matchday squad, in spite of lacking in match fitness. Franck Ribery and David Alaba will not feature for the Bundesligs champions. Dortmund have a relatively clean bill of health except for Ilkay Gundogan and Kevin Grosskreutz. Marco Reus returned in the weekend and is likely to start again.

Pep Guardiola will have Robert Lewandowski and Thomas Muller up front, with Mario Goetze as the attacking outlet and Schweinsteiger and Xabi Alonso in deep midfield. For the visitors, Marco Reus will be the biggest attacking threat, but Henrik Mkhitaryan and Shinji Kagawa will play crucial roles as well. Aubameyang is expected to be the front man.

According to H2H statistics, Bayern Munich have won 46% of its matches against Borussia Dortmund. The meeting between these two sides in the finals of the same competition last season resulted in a 2-0 victory for Guardiola’s side after extra time. This time round, Bayern could nick it by a 3-1 margin.