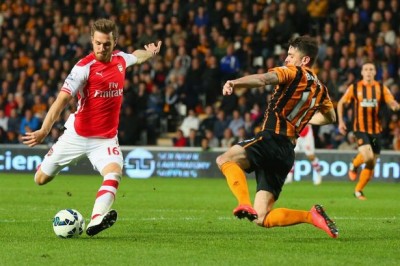 Arsenal inflicted a crushing blow on Hull City’s chances of escaping from relegation after Arsene Wenger’s men ran out 3-1 winners at KC Stadium last night. In spite of the battle for the English Premier League getting over on Sunday with Chelsea securing the title, Wenger fielded his first choice team against Hull. Steve Bruce stuck with the same team which won against Liverpool and Crystal Palace.

Arsenal began their night with dominating possession to a cent percent ratio for the first two minutes, perhaps an indication to what was to come after. Hull though, created the first real chance of the match when Sone Aluko failed to connect on a free header in the Arsenal box. Minutes later, Alexis Sanchez scored his 15th Premier League goal of the season off a setpiece he had won himself, after the ball took a cruel deflection off Michael Dawson leaving Steve Harper wrong-footed.

The performances from the deep midfielders of both sides were as contrasting as the fortunes of both clubs. While Francis Coquelin and Santi Cazorla asserted themselves through a solid holding display and an array of exquisite playmaking respectively, Jake Livermore and Tom Huddlestone stuttered spectacularly. The latter of the Hull City duo was repeatedly caught in possession, and it led to Arsenal creating scoring chances on the other end of the pitch.

Aaron Ramsey, who put in another brilliant shift scored the second while Alexis Sanchez put the game long past Hull’s reach with his second goal for the night, before Quinn clinched a consolation goal of sorts, ten minutes into the second half. David Meyler, returning from suspension, put in a spirited performance for the Tigers while Jack Wilshere’s return from injury would definitely buoy the Arsenal faithful. Hull created a few more chances towards the end of the second half, but it was too little, too late for Steve Bruce’s side. Similarly, Arsenal are the in-form side in top division, but it looks like their title challenge has also been too little, too late.

Arsenal are on 70 points, at the third place, having played one game less than Manchester City (who have a better goal difference) in the second position. Hull City are on 34 points, in the 17th position. They face Burnley next, before ending the campaign against Manchester United and Tottenham. A good showing in the next match and with some luck, Steve Bruce will rest easier in the coming days.