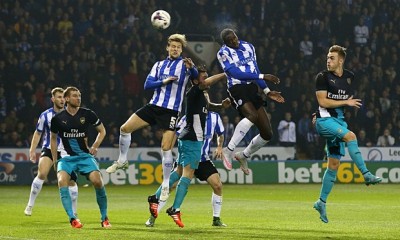 Chelsea and Arsenal lost their respective fixtures in the fourth round of the Capital One Cup while Everton defeated Norwich on penalties to progress further into the domestic competition.

The pressure on Jose Mourinho continues to mount as Chelsea fell to yet another defeat at Britannia stadium, albeit after a much improved performance. The Blues looked convincing and dominated possession right from kick-off but Jon Walter’s second-half goal looked ominous as the struggling Stoke City tried to knock out last season’s League Cup champions.

In spite of creating numerous chances, Chelsea were failing to break down the solid Potters back four. Substitute Loic Remy scored a late equalizer to take the tie onto extra-time. Chelsea created a flurry of chances, with youngsters Robert Kenedy and Bertrand Traore at the heart of their attack, but failed to put the game past Stoke City’s reach. Jack Butland stood strong during the penalty-shootout as Eden Hazard’s miss sent Stoke City through to the next round.

Arsenal’s 3-0 loss against Sheffield Wednesday counts as the biggest upset of the League Cup so far. An inspired performance from Rose Wallace means the Owls are in the quarter-finals of the domestic cup competition and have defeated Arsenal for the first time since 1998.

Luck was completely against the Gunners on Tuesday night as Arsenal first lost Alex Oxlaide-Chamberlain and later his replacement Theo Walcott to injuries. Alex Iwobi and Glen Kamara were the two debutants for Arsene Wenger, but the shocking nature in which the Gunners defence folded in face of Sheffield Wednesday’s onslaught would be a matter of concern for the Frenchman.

Everton showcased a perfect penalty shootout as they engineered a 4-3 win from the spot-kicks after the teams were tied at 1-1 after extra time. Sebastien Bassong had given the Canaries a deserved lead at the 51st minute, but Leon Osman equalized seventeen minutes later. Both teams had chances to find a winner, especially in the final minutes of the game. However, poor finishing took the tie to extra-time and eventually to the penalties.

Tonight, three other English Premier League giants take the pitch in a bid to reach the quarter-finals of the League Cup. Manchester City face Crystal Palace at home while Manchester United welcome Middlesborough at the Old Trafford. Aston Villa, sans Tim Sherwood travel to Southampton as the side tries to cope up with the cup tie, all the while aiming to salvage their domestic season. Liverpool hosts AFC Bournemouth as Jurgen Klopp looks for his first win at the Anfield club.