Bologna vs Internazionale – Serie A – Preview 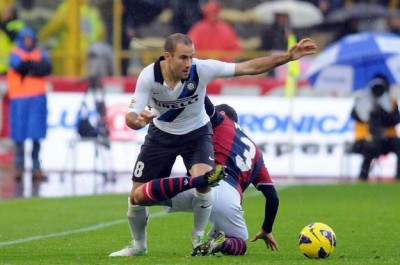 Bologna host Internazionale in a tricky midweek fixture of the Serie A on Tuesday as the relegation-threatened club aims to build on its 2-1 win over Carpi. Internazionale sit on 4th in the league standings after three consecutive draws, the latest of which was against Palermo when they came from behind to play out a 1-1 result.

Bologna will be without Antonio Mirante, Emil Krafth, Anthony Mourier and Alex Ferrari, all of whom are sidelined through injuries. Nemanja Vidic is the only injury concern for Roberto Mancini’s side. Jeison Murillo was sent off against Palermo and would be suspended tomorrow. Andrea Ranocchia is expected to replace Murillo in the starting line-up.

Inter Milan are undefeated in nineteen of their last twenty-one matches against Bologna in all competitions, according to Head-2-Head statistics. Bologna have also lost five of their last six home matches in the Serie A. The last six encounters between both sides have yielded two draws and two wins each for either side.

Inter’s goalscoring prowess have been questioned heavily over the last few weeks and Bologna’s defence has been somewhat shaky as the club has struggled to win matches. The late winner away at Carpi in a tense game is bound to offer the Rossoblu the necessary confidence to take on Internazionale, but Bologna are extremely unlikely to cause an upset.

Based on current form and past history, a draw is the most likely result of tomorrow’s encounter, with 1-1 being the most probable scoreline.

“We knew that Roma, Napoli and Lazio always do well and would be back up the top of the table soon enough. We need to try and stay up there. Our goal is to remain in those first positions, nothing serious has happened, there are five sides separated by two points. We need time to find the right formula for the side.

Bologna means a lot to me on a professional level. It won’t be an easy match, but if we play the way we did in the second half against Palermo we’ll have a good chance of winning.”