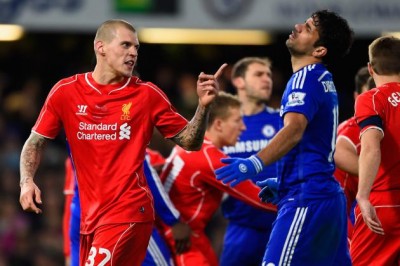 Chelsea will host Liverpool at Stamford Bridge on Saturday with Jurgen Klopp looking for his first Premier League win and Jose Mourinho aiming to salvage the Blues season. Liverpool’s new manager Klopp oversaw the first win in the League Cup tie against AFC Bournemouth in the midweek. However, Chelsea’s disastrous start to the new season continued as the defending champions of the Capital One Cup were knocked out of the competition by a resurgent Stoke City in penalty shootout.

Chelsea sit on the 15th position in the league table with five losses already while Liverpool sit at the ninth position with five draws. Such has been the precarious nature of the English Premier League this season, that a win would see Chelsea leapfrog into the upper half of the table and become equal with the Kops in points.

Thibaut Courtois is the long-term injury absentee for Chelsea. Branislav Ivanovic is still recuperating from the injury he picked up during the international break and is unlikely to feature in the starting lineup. Diego Costa is doubtful after he bruised his ribs during the match against Stoke City, as is Pedro who has a knock of his own.

Liverpool have a lengthy list of absentees. Jurgen Klopp will miss the services of Jon Flanagan, Jordan Henderson, Joseph Gomez, Danny Ings, Jordan Rossiter, Kolo Toure through injuries. Daniel Sturridge is yet to regain match fitness, but might feature in the matchday squad, for a lack of better options.

Chelsea have completely dominated this particular fixture ever since Jose Mourinho’s return. In fact, according to Head-2-Head statistics, Chelsea have won four times and drawn on only two occasions in the previous six encounters. In all competitions, Chelsea have drawn their last three matches against Liverpool. The Kops meanwhile have played out three consecutive draws in the last three league matches. While Chelsea have conceded at least two goals in eight of the ten matches so far, Liverpool have been particularly poor in their finishing.

The pressure on Jose Mourinho to turn around a corner and deliver positive results is increasing and the result of this game would play a crucial role in deciding his future at the club. Based on current form, a 2-1 win for Liverpool is the most likely result.